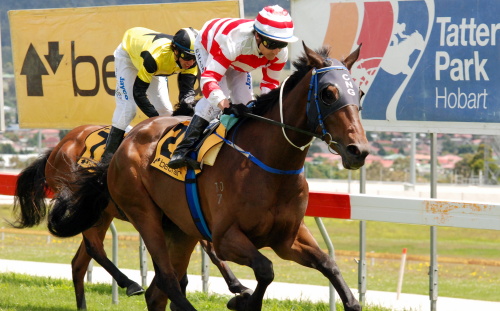 While both are considered outsiders in the field of 16 White says the race appears to be very open and considers both from his stable to be legitimate winning chances.

Luzambo has won two of his past three starts while Gathering Gold is yet to salute this season but she has been very competitive without having had much luck in her three assignments.

Luzambo has drawn poorly in gate 16 and will need some special magic from rider Justin Hamer to ensure the gelding is well placed in the run, while Gathering Gold has fared much better with gate eight.

“If Gathering Gold begins well tonight and can get a trouble free ruin and be with the leaders turning for home then she will probably win the race,” White said.

“Luzambo has done everything I’ve asked of him leading up to this race but he is definitely going to need some luck from such a wide barrier.”

“Justin (Hamer) has been able to work some magic on a couple of other horses that drew bad barriers in recent weeks so we are hoping he can do it again.”

“Luzambo is very tough but pretty much one-paced so he is going to need some cover and can’t afford to be held up.”

“It is a very open race but if Socks has taken no harm from his run in that weight-for-age race and he runs out a strong 1600 metres then he is probably the one to beat,” he said.

Gathering Gold is quoted at $13 on fixed odds with BetaSport while Luzambo is at a very respectable $17.

Trainer Charlie Goggin also takes a two-pronged attack into the race with two of the more fancied candidates.

Rose Of Scotland is next best in the market at $6.00 followed by her stablemate Ben Annalou ($6.50) that is unbeaten from two starts this time in and will be ridden by Jason Maskiell.

Goggin has always had a big opinion of Rose Of Scotland and expects her to improve a lot on her last-start failure when she got too far back in a farcically run race.

Ben Annalou has been very impressive in winning at his only two outings this timer in that comprised an effortless victory in a maiden in Hobart and a last-start triumph in similar fashion under lights in Launceston.

“Rose Of Scotland will definitely appreciate the 1600 metres of tonight’s race and Ben Annalou also gives me the impression he will appreciate the distance so I have two very good chances in what will be a tough race,” Goggin said.