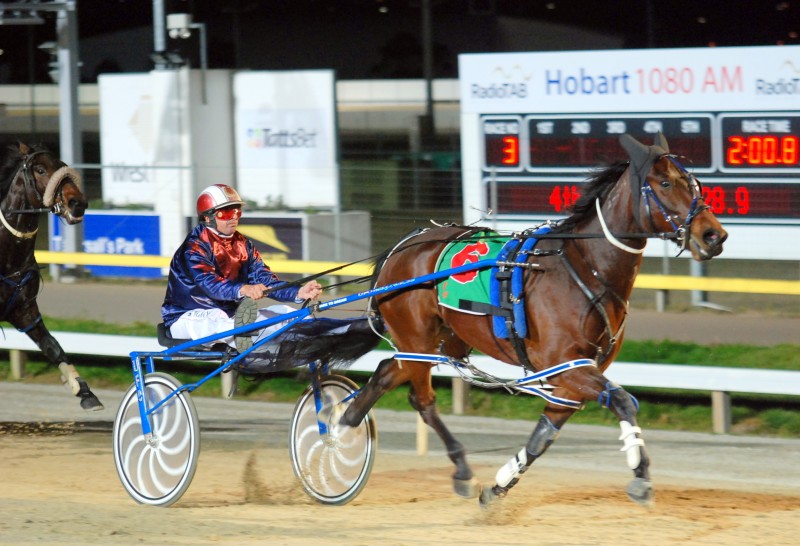 PROMINENT Tasmanian harness racing horse owners Jamie Cockshutt and Barry Cooper celebrated a two-state double on Sunday night when Franco Sheffield won a 2YO race in Hobart only minutes before Watch This Spot scored an impressive win at Cranbourne in Victoria.

Franco Sheffield, prepared by Juanita McKenzie, won on debut in Hobart last week over 1609 metres winning by a comfortable margin but on Sunday night he left his rivals in his wake scoring by 26 metres in a 2C0-2C1 over 2090 metres in what was one of the most awesome displays seen on the Hobart track in a long time.

Driver Ricky Duggan had the youngster settled at the rear of the field from his outside front-row draw.

But after the lead changed three times Duggan sent his charge around the field and it was the scintillating turn of foot unleashed by Franco Sheffield that impressed the most.

Watch This Spot was making his debut for Dean Braun and he never let punters down by leading throughout to score an effortless win in a 2YO Pace over 1609 metres.

Watch This Spot (Elsu-Prima Bella) and Franco Sheffield (Live Or Die-Showy Franco) started at $1.50 and favourite in their respective races.

Listen to what part-owner Jamie Cockshutt had to say about his and Cooper’s two-state double – CLICK HERE.