Twograndahand makes most of stable change 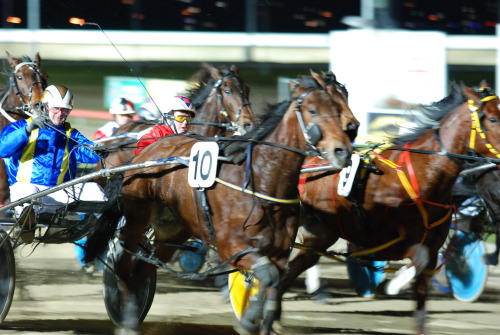 A CHANGE of stable and drop back in class has given six-year-old Twograndahand a new lease on life, evidenced by his barnstorming win in Hobart last Sunday night.

Twograndahand produced a powerful finish to overhaul the leaders in the shadows of the post to score arguably a career best win.

The gelding was trained by Phil Hay who races the six-year-old in partnership with his wife Michelle.

They sent the horse to Brighton trainer Eric Jacobson who has managed to turn the horse’s form around.

“Phil (Hay) sent the horse to me to see if a change of environment would help and it obviously has but the horse also dropped down a couple of grades and that has made him more competitive,” Jacobson said.

Hay was full of praise for the horse’s new trainer.

“Eric has done a marvellous job and everything has pretty much panned out as we had hoped,” Hay said.

“We also worked out that most of the races he would be eligible to contest were in the south of the state so that convinces us to send him to Eric,” he said.

Jacobson said Twograndahand had thrived in his new stable environment and expects the gelding to continue to perform well in whatever he contests.

“He’s won two and been placed twice from eight starts for me and on his present form you would expect him to remain competitive,” the trainer said.

Twograndahand has started 92 times for 12 wins and 35 minor placings for almost $63,000 in stakes but 10 of his wins were in NSW for his previous owners.