Uboa backs up to win two in three days 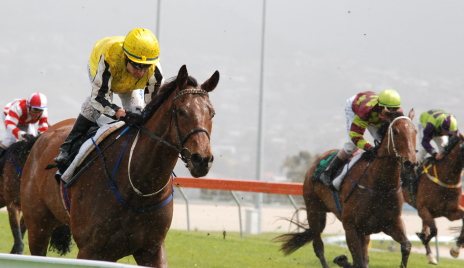 PROMISING stayer Uboa made it two wins in the space of three days when he powered his way to victory in a benchmark 78 event over 2080m on the inside grass track at Tattersall’s Park in Hobart today (Sunday Oct 16).

Uboa won under lights in Launceston last Thursday night after which his trainer Graeme McCulloch said the gelding would back up if he pulled up well from that race.

“The plan was always to run in both races irrespective of the outcome on Thursday night if the horse was well in himself and he ate up every grain when he got home from the races last Thursday night so I knew he’d be right for today,” McCulloch said.

The race was run at a modest pace with Just A Gee Gee allowed to slide to the front leaving the home straight the first time.

Jockey Stephen Maskiell allowed Uboa to creep his way into the race from the 800-metre peg and when he let down in the home straight he powered clear and went on to score comfortably from the Gary White-trained dup Sophistication and Mr Isaac.

Listen to what trainer Graeme McCulloch had to say about Uboa’s impressive win – click here .