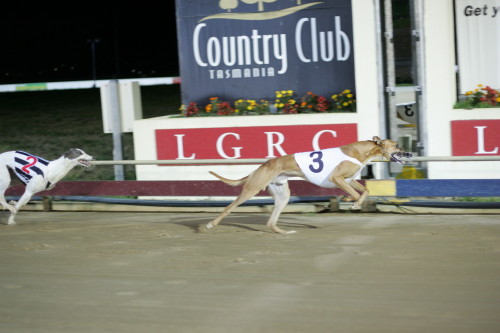 The first round of the Launceston Mitsubishi Medley series in Launceston tonight (Monday) produced upsets.

Stylish Bernie (Where’s Pedro-Stylish Dotty) took out the first heat over 600 metres with a stylish display of chasing.

The Mark Sutcliffe-trained dog settled third from box three but down the back stretch he closed the gap on the leader Rulla Road and then put the end result beyond doubt in the home straight.

Stylish Bernie cruised to the lead and went on to score by almost three lengths from Rulla Road with Burn It Down third, just in advance of the favourite Munich Monelli.

The Nick Howard-trained dog (Pure Octane-Bella Portrait) showed brilliant early speed to lead from box three and was never headed on his way to a comfortable win over the odds-on favourite Stylish Moon with Big Jack Sparrow a distant third and just ahead of Arnhem Illusion.

The top eight point scorers from two rounds of heats over 600 metres will progress to the final over 720m.

Fourth collects four points and reduces by one through to seventh with last place earning no points.

The next round of heats will be run next Monday night with the final over 720 metres the following week.