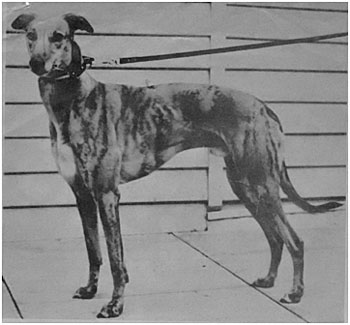 ONE of Australia’s best ever hurdlers Valiant Spirit was immortalised last week when he was inducted into the Tasmanian Greyhound Racing Hall of Fame.

Valiant Spirit was inducted along with Bomber’s A Flyer, trainer Hilda Williamson and associate Don Bomford who is one of the longest serving club officials still serving in Australia.

Valiant Spririt began his career in flat races in 1956 and at his third start won a juvenile at the old TCA Ground circuit. He won another 11 flat races but his forte was hurdling.

Originally trained by Jack Slater the dog won a handful of races on the flat for his owner John Hawksley who didn’t think he had much of a future and sold him to wily trainer Jim Breen for 50 pounds ($100), although in those days that amount would be worth something in the vicinity of $3000 based on real estate prices of the time.

Breen saw something special in the dog other than his kind nature and so the dog’s hurdle journey began.

Valiant Spirit won 42 times over hurdles along with a multitude of placings but it was his ability to defy tough handicaps that earned him champion status.

In Hobart six of his wins were off 5/10’s of a second behind scratch. He won another eight off 4/10’s behind and at one stage of his career he raced 18 times in Hobart for 10 wins, five seconds and three thirds.

His last career win (54) was at the TCA in October, 1961 when aged six years and seven months and that night he 4/10’s to the front markers.

Valiant Spirit’s handicap achievements at White City were even more remarkable as the handicapping was more severe.

In late 1959 he won a hurdle at White City in Launceston off seven yards behind on a seven yard front, a feat never before achieved.

Seven metres was as far back as the fence behind the boxes allowed a dog to be handicapped. The rules meant this dog had to be handicapped further, so the Launceston club committee amazingly ripped the fence down, allowing more room to further handicap Valiant Spirit.

The move failed to alter the dog’s dominance. In 1960 he won off one yard behind scratch, giving away eight yards to the front marker.

But he kept winning and to prove his greatness he did what no other the dog could do anywhere else in Australia and that was to win off a back mark of five yards behind scratch that gave away 12 yards to the front marker.

To emphasise the dog’s versatility, in 1961at almost six years of age and at the height of his jumping career he was entered for the Launceston Cup.

At his first run on the flat for almost a year he won his heat defeating Roslyn Speed in a time of 30.93s while reigning Australian Cup winner Meadow Vale was unplaced.

Valiant Spirit raced for five years and three months winning 54 times with 20 seconds and 11 thirds for about 2500 pounds in stakes.