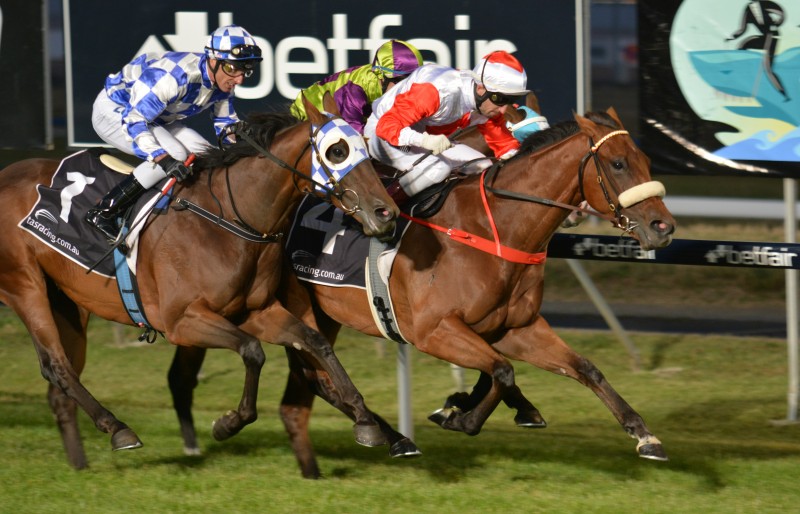 EMOTIONS ran high at The TOTE Racing Centre in Launceston last night when unbeaten three-year-old Valiant Warrior again lived up to his name by outgunning proven superstar Admiral in the $50,000 Hesketh McCrimmon Insurance 3YO Cup over 1200 metres.

Valiant Warrior won twice at two and at his previous two starts as a three-year-old he had scored impressive wins but this latest effort marked him as a star on the rise.

The Adam Trinder-trained gelding by West Quest from the Never Quit mare Fast Ride has shown bulldog characteristics from his first start and his owner Wayne Roser again explained why the horse means so much to him and his family.

“Our first grandchild (Christopher) was born quite premature and there were many complications but after numerous operations he died,” Roser said.

“We called him (Christopher) our valiant warrior because he tried so hard to stay alive so when it came to naming this horse I chose that name with the hope the horse might live up to the name and he has,” he said.

Valiant Warrior possesses a never-say-die attitude to racing and his rider Anthony Darmanin described the gelding as “A real bulldog that is in for the fight when the going gets tough.”

“Tonight he showed another dimension because he didn’t lead as he had done at his four previous starts,” Darmanin said.

“I eased him back and he relaxed well and when I got him off the fence to stake his claim he hit the front and then he dug deep when Admiral came at him – It was a very courageous win,” he said.

Valiant Warrior will now be saved for the 2YO Tasmanian Magic Millions Classic in February after which he will head to South Australia for that state’s edition of the Magic Millions series.

Admiral lost no admirers despite being beaten fair and square.

The Barry Campbell-trained gelding had to concede Valiant Warrior three kilograms in weight and in the end it was a telling factor with Admiral forced to carry the hefty impost of 60 kilograms which went to 61 kg including the jockey’s vest.

Geegees Doublejay also showed his class by leading the field and then fought on to be a close-up third so he too will be a force in the upcoming 3YO feature races.

Admiral will progress to the Tasmanian Guineas over 1600 metres and that could be a more suitable distance for last season’s 2YO of the year.