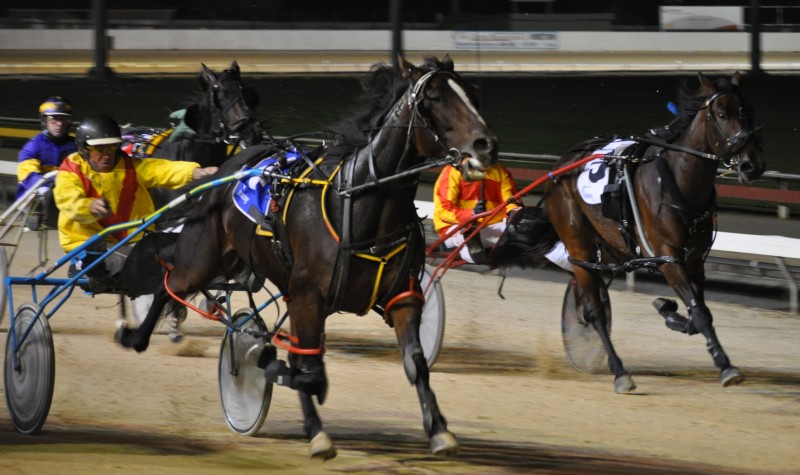 HARNESS racing trainer Christian Salter was forced to make a couple of stops on the way home from the Devonport meeting last night to take a nap after what was a tiring day of preparing horses and heading off from Brighton to participate in the North-West Coast meeting.

But the tiring exercise was well worth it given the performance of his talented four-year-old Vande Velde that won a heat of the Raider Stakes and will probably start favourite in the final in a fortnight if he draws the front line.

“It was a long trip home that took about 4-1/2 hours after stopping twice to have a nap but it was a worthwhile trip,” Salter said.

Vande Velde had produced impressive efforts from time to time in two and three-year-old events but never quite measured up in feature races.

But this time in the gelded son of Fourstarzzz Shark has finally delivered the goods with his win at his start prior in Launceston a signal that the penny has finally dropped.

“His win in Launceston was terrific but I wasn’t totally convinced until this Raider Stakes heat win that he is finally doing what I always believed he was capable of as a younger horse,” Salter said.

“He is putting it all together now and when he has the opportunity to sit and sprint he really delivers at the business end of his races,” Salter said.

Vande Velde ($3.70) powered home after enjoying a sit in the one-out line to score from the fast-finishing Chirac that trailed three-back the fence with the winner clocking a mile rate of 1.59.9.

The remaining heat was won by Le Premiere that led throughout with Gareth Rattray in the sulky.

The odds-on favourite Resurgent Spirit moved from last to face the breeze two laps from home but when he put it to the leader in the back straight the last time Le Premiere dug deep and refused to wilt.