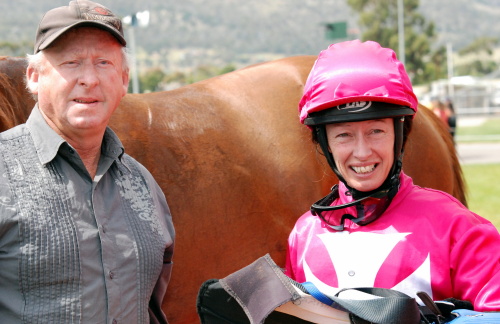 VETERAN trainer Neil Richardson is no stranger to producing long shot winners having produced King Of Belmont to win a Tasmanian Derby at odds of 150/1.

At Tattersall’s Park in Hobart on Sunday he was back in the winner’s circle with another winner at bolter’s odds in the form of Paddy’s Jubilee that saluted as the rank outsider in the first leg of the quadrella.

Paddy’s Jubilee delivered the knockout blow to most punters although victory was no surprise to her trainer.

“She pulled up bad after her previous run and I was able to sort out the problem that forced her to race so poorly,” Richardson said.

“I thought she would win two starts back and she almost got there and every time I’ve put her in a race where she is well out of her class she seems to race much better.”

“I had a little something on her today and I can’t believe she’s paid over $100,” he said

Paddy’s Jubilee was well ridden by Dianne Parish who made the trip down from Devonport for just the one ride.

“I told Neil I would ride her whenever he needed me so I came down for the one ride, although I picked up another ride earlier on the program,’ Parish said.

Paddy’s Jubilee ($113.90) settled just off the pace from a good draw and when Parish called on her to extend in the home straight she pounce d on the leaders and hit the line almost a length clear of the favourite Testamarriage ($3.90) with Redbougg ($32) the same margin away third.