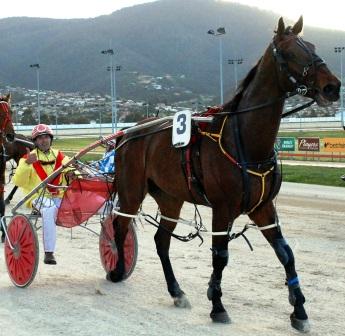 Former top juvenile pacer Vinokourov made a brilliant return to racing in Hobart on Sunday night when he came from well back to score an impressive win in a free-for-all over 2579 metres.

Vinokourov had not won in almost two years but the way he finished off on Sunday night had his trainer Christian Salter smiling like a Cheshire cat.

“This horse has had his share of problems and he still takes a lot of management but to win like that first-up is very encouraging” the trainer said.

“He has been working well and to be honest we thought he might be very much in need of the run but he really delivered over the final stages and I’d say it was more than what we expected,” he said.

Vinokourov was a star three-year-old and developed into a talented open class horse that included a Raider’s Stakes win as a four-year-old prior to winning the prestigious Elite Stakes against some of the best open class horses of the 2007-08 season including Fleet Express, Oomph and Village Driller.

But he has been plagued by leg and back problems that have impeded his progress to star status.

Vinokourov was off the scene for over a year after finishing down the track in the City of Launceston Cup in December 2007.

“He had a few problems and we had to stop and star a few times but he has been really good this preparation and provided he comes through this race unscathed we will push on towards the good races during the December carnival,” said owner Noel Salter.

The seven-year-old was driven for the first time by ace reinsman Ricky Duggan who heaped praise on his charge after the race.

Listen to what Ricky Duggan had to say about Vinokourov after the race – click here .