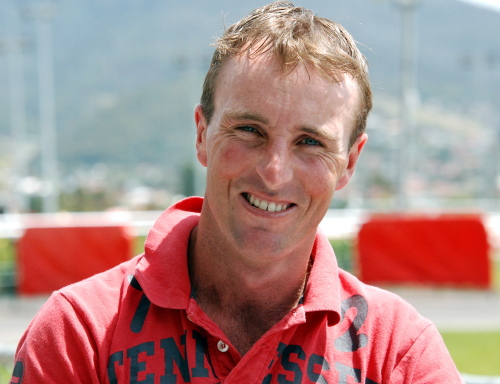 MICHAEL VOSS has been working in the Tasmanian racing industry for almost 14 years of which the past seven have been as a trackwork rider and stable foreman for multiple premiership-winning trainer Charlie Goggin.

During his time with Goggin he has earned a reputation as a quality horseman and Last week Voss became a licensed trainer that will eventually lead to him establishing stables of his own.

Voss, 30, is a former jumps jockey who enjoyed a lot of success and notoriety with the Michael Trinder-trained hurdler-chaser Misty Weather that took the national jumps racing scene by storm in 2003 winning the Hiskens Steeple.

Voss had only 40 rides over the fences for four wins and all were aboard Misty Weather.

A career as a jumps jockey was never considered a long term proposition by Voss.

“I wanted to be a vet but to progress to university in Melbourne my TCE score at year 12 at college had to be 92 but my level was 91 so it meant I would have to do another year taking a science course to get me to the required level,” Voss said.

Voss decided to take break from studies for a year to consider his options.

“I had been riding since I was four at pony club and loved horses so when I saw Graeme McCulloch’s (horse trainer) advertisement in the local paper seeking a stablehand-trackwork rider I applied.”

“Graeme gave me a go and the first horse I rode could have ended my career there and then.”

“The saddle broke and up in the air I went but when I landed on the ground I was still sitting in the saddle so Graeme looked down at me and said I could definitely stay,” he said.

Voss spent about two years with McCulloch and by then had decided to forego his dream of becoming a vet.

During his stay with McCulloch he acquired his jumps jockey licence and became a valued trackwork rider in the north of the state.

He went to work for the late Jack Green at Longford before finding a role at John Blacker’s Longford stable that eventually led to him looking after Blacker’s satellite stable in Victoria.

In late 2003 he landed the job with Goggin’s stable as a trackwork rider that eventually led to him becoming the stable’s travelling foreman, a role that included looking after Goggin’s stable star Conquering.

“Conquering took me to places I may never have seen,” Voss said.

Conquering won multiple feature races in Melbourne and Voss was there every step of the way.

“You have to try and not get attached to horses but Conquering is and always will be very special to me,” he said.

Voss has two horses in work, Hypothermia and a newcomer to the state named Farasi.

“My first runner in my name as trainer will be Hypothermia in a class four over 1200 meters on Derby Day (February 5),” he said.

Voss will continue working for Goggin until he has enough horses to establish his own training enterprise.