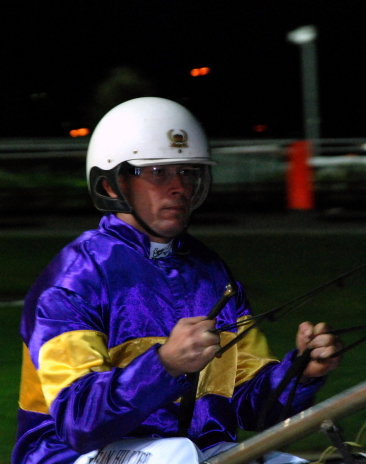 BEACONSFIELD trainer Rohan Hillier is having arguably his best season with his strike rate hovering around 40 per cent.

In Launceston last Sunday night Waiona, a horse he acquired from a claimer in Victoria, scored the most impressive win on the 10-event card when he powered home from what looked a non-winning position turning for home to take out a C7 or better discretionary over 2698 metres.

Coming off a handicap of 20 metres he settled eighth on the rails and while Hillier was able to get him off the fence leaving the back straight the last time the seven-year-old gelding was still positioned beyond midfield at the top of the straight.

Armbro Spur, that trailed the leader, looked set to tip out the favourite Empty Envelope close to home but Waiona finished at the rate of knots to get up and score by a neck from Armbro Spur with Empty Envelope a metre astern and just in advance of race leader The Music’s Over.

“I didn’t expect him to win off 20 metres but he ended up getting a dream run when it counted,” Hillier said.

“Another horse (Notaswethort) dropped off at the 600m that let me out, otherwise he wouldn’t have won.”

“He’s really going well and he is such a trier,” he said.

Waiona has started 10 times for Hillier for four wins and two minor placings.

Waiona’s main mission is the Hobart Pacing Cup in early January with heats of the race series on New Year Day.

Hillier capped the night by driving the Maurice Jarman-trained In Cruise Mode to victory in the BOTRA Pace over 2200m.