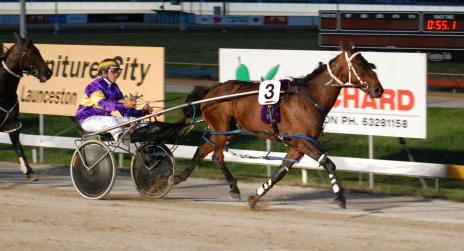 FORMER Victorian pacer Waiona made it three wins from his past four starts in Tasmania when he led all the way to take out the Doug Martin Danbury Park Cup over 2698 metres at The TOTE Racing Centre in Launceston tonight (Sunday).

With his trainer Rohan Hillier in the cart Waiona stepped cleanly from his 10-metre handicap and had no trouble finding the lead.

Once in front Hillier rated the gelded son of Island Fantasy well and in the home straight he had al the answers when challenged strongly over the final 200 metres.

It was a top class field with Victorian Tanabi Bromac sent out an odds-on favourite at $1.90 but there was late support for Waiona that tightened late in betting from $6.00 to start the $4.40 second-elect.

Tanabi Bromac settled last and was sent three-wide at the bell by leading driver Gareth Rattray and he made steady ground to the home turn.

When Rattray called on the favourite for the big effort in the home straight it looked as if he might run past the leader but Hillier’s charge was defiant and staved off all comers over the last 100 metres.

It was Waiona’s third win from nine starts for Hillier who claimed the gelding for $9000 when offered up in a claiming race at Maryborough in country Victoria in May.

The gelding opened his winning account in the Big Park Show Cup in Launceston and at his next start he won a claimer at the same venue.

Listen to what trainer-driver Rohan Hillier had to say about Waiona’s latest win – click here.