Walk Hard has Hobart Thousand at his mercy 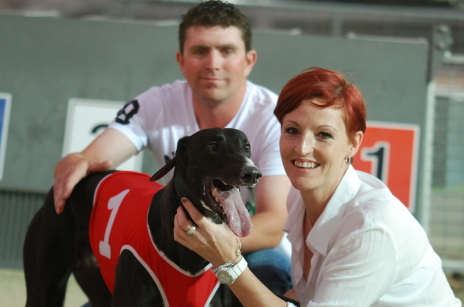 LIGHTLY raced dog Walk Hard emerged as a potential superstar after he scored an emphatic win in a heat of the $100,000 Group 1 Tattsbet Hobar5t Thousand over 461 metres at Tattersall’s Park in Hobart last Thursday night

Walk Hard began only fairly from box one but so quickly did he muster speed that he was ahead of his rivals after travelling 50 metres and once he had the lure in sight he sped clear of his rivals and went on to score by almost eight lengths from the Andrea Dailly-trained Grigorieva Bale with Graeme Bate’s Fully Advanced five lengths away third.

Walk Hard (Bit Chili-Miss Bling) went within one-tenth of a second of Bergermeister’s track record of 25.71 but that came as no surprise given the dog had solo trialled in 25.69 five days beforehand.

The dog is prepared atClydeby Nicole McRae who has been involved in greyhounds all her life as a member of the John and Carol Westerlo.

She targeted the Hobart Thousand after the dog had run good times at Warragul.

“I thought the Hobart Thousand would be a nice race to target when he ran really good times at Warragul last month,” McRae said.

“He missed the start a little bit tonight but he just hunted up underneath them and once he got to the front it was all over,” she said.

Walk Hard had a hiccup in his preparation as McRae explained.

“He dislocated a toe and that took time to heal. Some people advised me to have it removed but I decided against it and everything has worked out alright,” she said.

Walk Hard has had only 17 starts for seven wins but the testament to his ability is his winning margins.

From his seven wins the dog’s cumulative margin is 67.25 lengths at an average of 9.6 lengths.

He has won three from box one but also has saluted from boxes two, six and seven.

Walk Hard is normally very quick to begin so if he remains in his present state of mind then he is going to be very hard to beat in the final.

The final is made up of an even mix of interstate invaders and local hopes.

Tasmania’s champion and Hobart track specialist Rewind that ran second, beaten a lip in last year’s Hobart Thousand, made his way to the final with an effortless win in his heat.

However his time of 26.22 was pedestrian compared to Walk Hard.

Nevertheless the dog did what he had to do to make the final and no doubt trainer Morrie Strickland will have the dog at his peak for Thursday night’s final.

Rewind (Collide-Ricky’s Angel) has a personal best on theHobarttrack of 25.78 that he recorded in winning his Hobart Thousand heat last year.

The dog has an incredible record on theHobarttrack of 17 wins and four seconds from 21 starts.

Darren McDonald is no stranger to success in the Hobart Thousand and he has as good a chance as any of snaring this year’s prize with Under Threat that notched an impressive win in his heat.

Under Threat (Premier Fantasy-Alotta Mojo) began well from box seven and crossed down to the rail nearing the top turn and despite being challenged strongly by Veyron Bale in the home straight he had enough in reserve to stave off the challenge and defeat that dog by a half-length with local star Rob Pines a closing third.

Maverick Tiger (Big Daddy Cool-Shanlyn Lass) began well from box four but had a tussle with Nitro Cee on his outside to the home turn where he gave the Wayne Vassalo-trained bitch the slip and went on to score comfortably.

Maverick Tiger stopped the clock at 26.16 but no doubt will improve on that with clear racing rook in the final.

“I am happy with that effort because he had a bit of trouble getting away from Nitro Cee and that would have hindered his chance of running really good tome but he’s into the final and that was our main aim tonight,” Greenough said.

“The dog will stay here in Tasmania and I’ll spend a few days here as well.”

“I have to go back and tend to a couple of things but I’ll be back and I am really looking forward to next week’s race,” he said.

Tasmania’s leading trainer Ted Medhurst will be represented in the final by the most inexperienced dog in the field in Dark Warrior that has had only seven starts but he is unbeaten.

Dark Warrior made the most of the inside box and led the field to the top turn where he was challenged seriously by the odds-on favourite Proven Maddy from the Wayne Vassalo kennel.

But Medhurst’s young gun that doesn’t turn two until next month refused to surrender and forged clear over the concluding stages to defeat the favourite by almost two lengths.

Dark Warrior stopped the clock at 26.29 which was shy of his best (26.16) but if he can improve on that in the final he is a live chance.

Blackalls Boss began fairly from box two but quickly found the front and from there on it was a procession with the well bred son of Hallucinate going on to score by three lengths from Jennifer Ellen with Paua Of Darkness two lengths away third.

Blackalls Boss recorded a time of 26.25 that would suggest he will be very competitive in the final.

He was coming off a second to Maverick Tiger in the Ballarat Cup and his form since June is outstanding with nine wins from 16 starts and includes a win in the Shepparton Cup.

Burnt Fuse was impressive in winning his heat forBrightontrainer Brendan Pursell who is only in his second year of training greyhounds.

Burnt Fuse is owned inVictoriawhere he has done nearly all of his racing but he was sent to Pursell specifically to prepare him for the Hobart Thousand series.

The dog flew the lids from box six and gave nothing else a chance on his way to a four-length win over Captain Cosmic with the Graeme Bate-trained Joshua over three lengths away third.

The only surprise winner of the eight heats was the Steve O’Brien-trained Custodian that made the most of an inside run nearing the home turn to go on and score a half-length win over Terry Tibbs.

Custodian recorded the slowest time (26.41) of the eight heat winners but the son of Shanlyn Prince-Chiki Boss will be competitive if he can mirror this latest effort in the final.