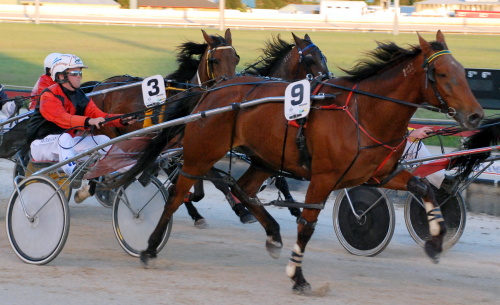 Liberty Niadh is trained at Latrobe by Neil Cameron and the 2YO filly was an impressive winner on debut in the $8,000 Launceston Belmont. Liberty Niadh was qualified to race in October 2013 but a setback shortly afterwards delayed the start of her racing career.

Rainbow Phoenix broke his maiden status on Sunday at start number 23. The 3YO Falcon Seelster colt had three placing’s prior to the victory and was well driven by Adrian Collins and paid a massive $57.50 for the win.

Boasson Hagen, a 2YO colt trained and driven by Christian Salter from Brighton, has drawn barrier seven in Race 4 at Ballarat. It’s an awkward draw at the best of times but when the Mark Purdon trained Follow The Stars is drawn in three and Birdy Mach (N12) is also in the race, Boasson Hagen may need plenty of luck to qualify for the final.

Boasson Hagen has won his last two in Tasmanian being the $30,000 Dandy Patch Final and a Breeders Crown heat. He ran placing’s behind Jerrys Jet at his other three starts.

Birdy Mach has a strong Tasmanian connection as he is a son of the Fred and Pauline Barker bred mare Pixel Perfect (Art Major – Amarillen). Mojo Major, which is part owned by Paige Ashwood and will be driven by her son Alex, has drawn inside the second line (B8) in the same heat. Mojo Major qualified for the semi final with a repechage win at Geelong last Wednesday.

The star Tasmanian 3YO filly Barynya has drawn barrier eleven in Race 5. She has had a remarkable season under the tutorage of trainer Dick Eaves and driver Rohan Hillier with 10 wins, a second, a third and a luckless fifth in the $110,000 Vicbred Super Series Final. Her wins have included the Victorian Oaks and the Tasmanian Oaks. Despite the second line draw, Barynya is likely to start favourite and should figure in the finish.

Resurgent Spirit is faced with the same challenge as Boasson Hagen – a wide front line draw in a hot field. The 3YO Barrie Rattray trained gelding has drawn barrier seven with the Barrie Purdon trained Our Sky Major in alley three on the front line and Bling It On, a winner of 17 races this season, trailing through from the second line. Bling It On won the 2YO final of this series.

The draws for the Tasmanian horses are much better on Sunday in the 4YO semi finals at Melton. Spitfire Rose, trained and driven by Rohan Hadley, has drawn the pole in Race 6. The mare has won eight from 19 Tasmanian starts this season and should qualify for the final.

Similar applies to Pachacuti. The Barrie Ratray trained gelding has drawn the pole in Race 7 and is coming off nine wins from his last 10 starts in Tasmania. Pachacuti has already demonstrated his ability at this elite level with a second placing last year in the 3YO final.

A 10 race card has been assembled for Hobart on Sunday night. Race 1 (C2 & better) is a standing start with another big field (13 acceptors) following on frm last Sunday at Launceston when a capacity field of 14 contested the C1 & Better stand won by Karalta Dazzler.

Karalta Dazzler is likely to start favourite again in this standing start and the 3YO will be attempting his fourth consecutive win. It is timely return to form for the Kent Rattray trained gelding as it was on the same date (17 August) six years ago that Karalta Crown, the dam of Karalta Dazzler, finished third in the $302,000 2YO fillies Breeders Crown Final at Bendigo.

Nobeer Nofear, last seasons winner of the $30,000 Evicus Final for Tasbred 2YO’s, returns to racing as a late 3YO. Now trained by her part owner Gary Bishop at Cleveland, the filly is first up after a 13 month break. Nobeer Nofear finished midfield in a Carrick trial on 2 August.

Another 3YO filly, Angela De Marco, is progressing through the classes and will be attempting her fourth win from her last six starts in Race 3 (C1/C2) where she will start from position three on the front line.

The ‘Cups King’, Devendra, is looking at his tenth win for the season in the open discretionary handicap (Race 8). The 4YO Barrie Rattray trained gelding has collected the Devonport, Carrick and Burnie Cup’s and, in the absence of stablemate Pachacuti, is racing as well as any open class horse in Tasmania.