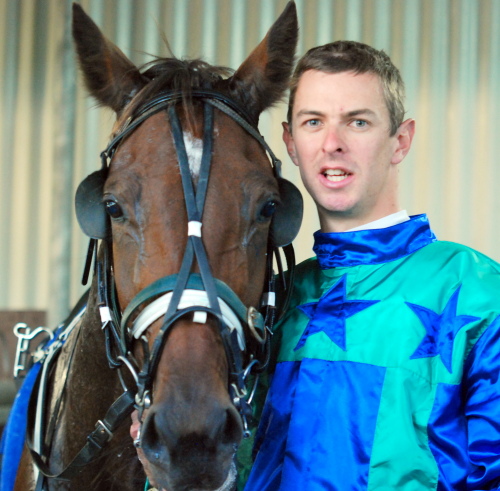 Seven Mile Beach trainer Zeke Slater trained a double at the Hobart meeting last Sunday night with Mister Pinjarra and Greysteel. Mister Pinjarra was having his first start in Tasmania on the back of seven wins and 15 placings from 47 starts in Southern New South Wales. The 5YO gelding was returning from a seven week break and was given a perfect trip by Nathan Ford to win narrowly in 2.01.4 – a handy mile rate for 2090 meters at Hobart.

Greysteel was out to amend two recent flops, after which he was ordered back to the trials by the stewards. Twenty seven year old Slater worked on the former City of Launceston Cup (2012), Launceston Mile (2012) and Golden Mile (2013) winner and the 10YO gelding did the rest by sprinting quickly in the stretch to grab stablemate Spot Nine in a fast mile rate of 1.58.9 for 2090 meters.

The Majority continued on his winning way for New Norfolk trainer David Dwyer, who prepares his team from the Brighton Training Complex, to record his third consecutive win. Prior to that The Majority was an impressive third in a M0 race at Melton in late July and Dwyer is taking him back to that venue on Saturday night where The Majority has  drawn the pole (R7 N1) in the $50,000 City of Melton Plate.

Tried And True is a recent mainland import for Bridport trainer/driver Rohan Hadley and showed the benefit of two local starts when he came from a rearward position to win the three year old and older non winners race. The 4YO gelding is lightly raced and appreciated the drop in class after finishing fourth to Fioki at Launceston the previous week.

Maybe Rama rewarded the patience of connections with an all the way win in the C2/C3 race in a relatively fast mile rate of 1.58.9 for the 2090 meters. The 10YO gelding has raced a mere 15 times for six wins and five placings due to persistent injuries throughout his career. Maybe Rama won both 2YO starts, won three from seven as a four and five year old and returned to racing as a 9YO in June this year. His six subsequent starts in Hobart have resulted in the win on Sunday nights, two seconds, two thirds and a fourth placing.

Vander Jenkins is a 4YO mare trained at Underwood by Heath Szczypka and was having her second Tasmanian start after four wins and nine placings from 23 Queensland outings. Todd Rattray drove a well judged race to work his way into contention at the top of the straight and after that it was all Vander Jenkins as she cruised to a six meter win rating 2.03.0 for 2090 meters.

On Saturday night, Beautide takes the next step towards the $750,000 Miracle Mile on 29 November. Beautide (N9) has the outside barrier in Race 6. and there are some likely Miracle Mile contenders drawn inside him. The flying Suave Stuey Lombo (N7) went a blistering 1.50.1 when beating Beautide by 2.4 meters on 20 September and Seel N Print (N8) was second to Beautide in the 2014 Inter Dominion Final.

Eight races at Launceston on Sunday

Good field sizes have been achieved for the eight race card at Launceston on Sunday night and patrons will need to keep their eyes glued to the track with the average time between races being 24 minutes.

The first starter Cranbre (N3) is likely to be well supported in Race 1. The 8YO gelding is well bred (Life Sign – Cranleigh) being a half brother to Riverboat Jasper (26 – 11 – 7 – 5) and Grace Campbell (6 – 1 – 2 – 2) and was an impressive trial winner at Carrick on Saturday defeating Vincent Can Go by eight meters.

Hesa Prospect is looking to repeat his win two weeks ago when he continues down the comeback trail in Race 4. The six year old injury plagued gelding has received no favours in the barrier draw starting from outside the front line however, he does appear to be the one to beat.

The first open class feature of the season is the $10,000 Tasmanian Horse Transport Show Cup (R6) and the impressive Tasbred 5YO’s Riverboat Jasper (N1) and Divas Delight (N8) meet again with the score being one each from their last two encounters.

Punters will need wide eyes in Race 7. to scan the entire field at the start when the likely favouite Rykov Leis lines up behind the 50 meter strand in the Boags Draught Pace. The last horse to win in Tasmania off that mark was Our Chain Of Command in an open discretionary handicap at Hobart in October 2013. When big handicaps are mentioned, Maxwells Best is the measuring stick in recent years, winning the 2001 Burnie Cup from 60 meters.