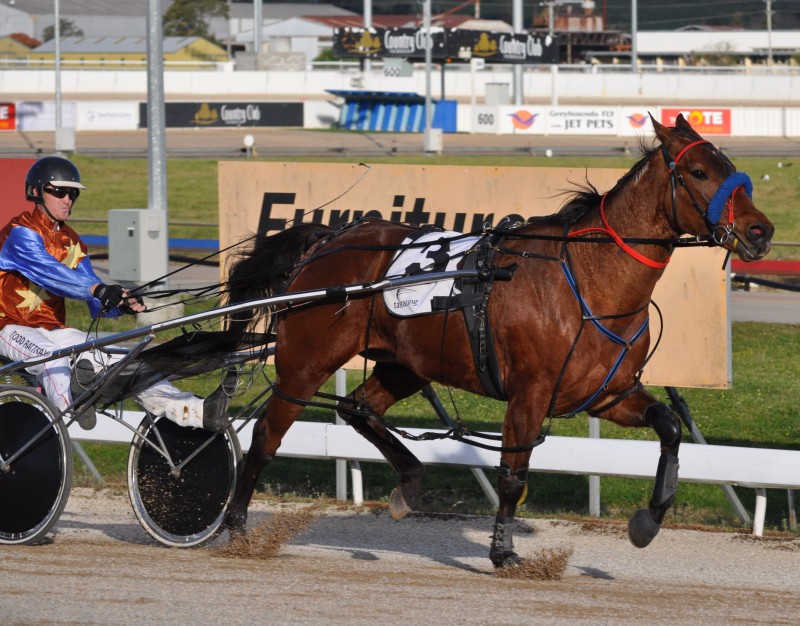 Veteran wins on debut at Launceston

Cranbre would probably qualify for a pension if he was a human but the 8YO gelding indicated he has plenty of life in his old legs with a pillar to post win at his introduction to racing at Launceston on Sunday night.

Trained at Scottsdale by Julie Johnson, Cranbre started favourite ($3.60) in the four year old and older C0 race on the back of an impressive Carrick trial win in late September. Driven Todd Rattray worked to the front early in the 2200 meters event and after a casual 64.5 for the first half, Cranbre reeled off a closing quarter of 28.6 to defeat Gottalovefridays by three meters.

Cranbre is well bred. His dam Cranleigh won 12 races including the 2000 St Marys Cup and an open discretionary handicap. She has produced five foals, the last four are winners and three look well above average – Riverboat Jasper, Grace Campbell and Cranbre.

All About Alice ($13.30) also recorded her first race win. The 5YO mare (Blissfull Hall – Rupee), trained at Riverside by Chester Bullock, was having her seventh race start and was given a perfect trip by recent Hall of Fame inductee Ricky Duggan to score narrowly from Lady Elaine ($40.10) who led until the shadow of the post for Westbury trainer/driver Michael Laugher.

The driving honours on the eight race card went to Brighton reinsman Christian Salter. Salter trained and drove Aninchofhislife in the C4/C5 race. Salter obviously has a lot of confidence in the 6YO gelded son of Red River Hanover and Ark Drifter as he was prepared to race the C3 pacer in a higher class race.

Aninchofhislife has been a consistent performer throughout with a career record of 48 – 9 – 7 – 10, but he appears to be improving with age going on his last 11 starts for three wins, a second and four thirds. Aninchofhislife looks well placed again on Sunday night at Hobart where he has drawn the pole (R4 N1) in a C4/C6 race.

Salter’s second winner was in the open discretionary handicap where the Zeke Slater trained Spot Nine came from 10 meters to win the race after the first horse across the line, Star Chamber, was disqualified for racing inside the pegs. Spot Nine won the $20,000 Hobart Pacing Cup earlier this year and the eight year old gelding has replicated that form since joining the Slater stable in late August with two wins, two seconds and a fourth from five starts. Spot Nine has now accrued $98,520 in stake money.

In recent months, Tasbreds have flown the Tasmanian harness flag across the eastern seaboard. Horses such as Bettor Draw, Truly Blissful, Lilbitachicknfried and Le Premier have won races on the mainland.

While some of those, and others, continue their racing careers, it appears there are new Tasbred ambassadors strutting their stuff north of Bass Strait. Devendra, Advanced Art and Partyboy Glenwood are winners in recent days.

Devendra won a $22,000 M1/M2 at Menangle on Saturday night for trainer/driver James Rattray taking his Menangle record to two wins from four starts. Devendra, bred by the Rattray Family Trust and now raced by 71 year old Youngtown resident Viv Clarke, was the ‘Cups King’ in Tasmania last season winning the Devonport, Burnie and Carrick Cups along with the $30,000 Raider Stakes.

Advanced Art won his second race in the space of eight days when successful at Albion Park yesterday. The 6YO gelding (Art Major – Daylight Advance) was bred by Lyndon Dakin and won four from 36 starts in Tasmania. His career record is 49 – 6 – 9 – 10.

Partyboy Glenwood was having his first interstate start at Kilmore yesterday after six wins and 16 placings from 43 Tasmanian starts. The talented but erratic 6YO gelding was on his best behaviour for the leading trainer/driver combination of Andy and Kate Gath when he death seated before winning the C2/C3 race comfortably in a handy mile rate of 1.58.6 for 2180 meters. Carrick trainer Brian Mackrill bred Partyboy Glenwood and Mackrill and Maree Breward have owned Partyboy Glenwood throughout his racing career.

Nine races at Hobart on Sunday

It’s an interesting nine race card at Hobart on Sunday night. In Race 2. New Norfolk trainer Paul Belcher has Iden Up There (N2) at the races for the first time. The 3YO Elsu – Iden Byrd has some smart older brothers and sisters. Iden Byrd has produced nine foals and six are winners. Five have won between six and thirteen races – Iden Rocky, Iden Countess, Iden Justasmyrk, Iden Miss Ellie and Idengood Time. Iden Up There was fourth of five in a Hobart trial last Weednesday.

Real River (N6) is back from a five month break in Race 4. The 6YO entire won three on end in Tasmania last season before four unsuccessful starts in New South Wales. Real River hasn’t been to the trials in recent weeks but Windermere trainer Brooke Hammond usually has him close to the mark at the start of each campaign with two wins and a placing from four ‘first up’ runs.

Race 6., the open discretionary handicap, has only seven acceptors but the winner may be hard to find. The 20 meter backmarker, Spot Nine (N7), is attempting his third win from six starts for Zeke Slater. His stablemate Greysteel (N5) won a free for all recently but has to overcome a poor standing start record of one win and a placing from 11 attempts behind the strands. Star Chamber (N2) showed last week that he is back to his best.

Blue Pointer (N6) is first up in Race 7. The 5YO gelding has not raced for 13 months but did win his last two starts before the spell and won a Carrick trial two weeks ago. Blue Pointer has an impressive record of 20 – 7 – 3 – 3.

Bevan Gray (N2) will have his first Tasmanian start in R8 for Port Sorell trainer Geoff Smith. The 7YO ex New Zealander won three at home before heading to New South Wales in July 2013. At 16 subsequent starts over the next 12 months, Bevan Gray chalked up one more win – a 1.55.6 mile at Menangle in September 2013.