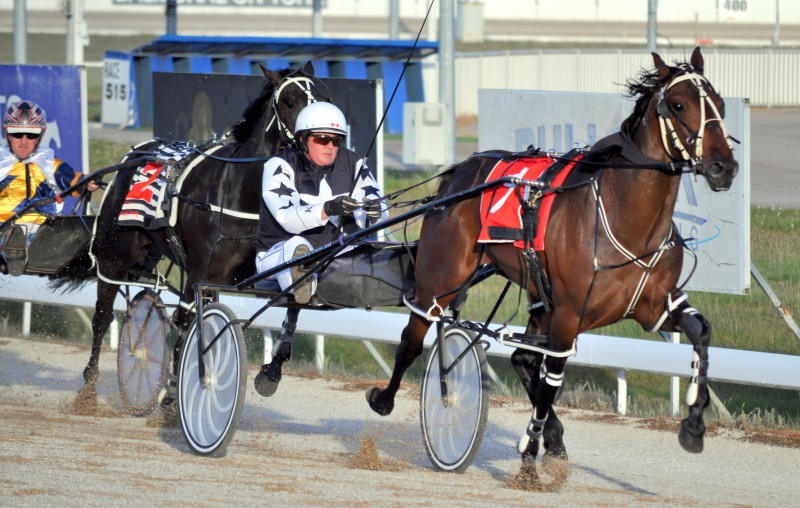 Todd Rattray, the youngest of the four sons of Denise and Barrie Rattray, is looming as a serious contender for this season’s driving honours after landing a treble at Launceston on Sunday night. The 24 year old Summerhill reinsman has joined Ricky Duggan at the head of the drivers table with 11 wins with Todd’s 29 year old brother Gareth next with seven wins.

Todd indicated last season that he is capable of taking out a state driving premiership when he finished third (68 wins) to Gareth (96) and Ricky Duggan (82). In the previous five seasons (2008/09 to 2012/13), Todd showed remarkable consistency finishing between fifth and eighth. Being the driver of choice for the powerful Barrie Rattray stable, Todd has every reason to be optimistic about his state premiership prospects this season.

Two of Todd’s winners last Sunday were trained by his father Barrie. The first was the promising filly Kyleasha who utilised the pole draw to maintain her unbeaten three year old record and register her second Launceston win in a fortnight. Kyleasha is shaping as a serious opponent for Followthewind and Fawzia in the three year old fillies races later in the season.

Rattray completed the family double with Rykov Leis in the C6/C7 race. A consistent five year old, the Art Major – Kazakova Leis gelding speared to the early lead in the 1680 metre event and got away with a cheap first half (61.9) before upping the tempo with a 56.8 closing half to just prevail from Giuliani (Ricky Duggan) in a tight finish. Rykov Leis now has a career record of 46 – 11 – 14 – 9 for $83,423 in stakemoney.

The other winner for Rattray was the undefeated eight year old gelding, Cranbre. Cranbre had won his only two race starts at Launceston during October and was stepping up to C2/C3 company. After a wide trip early he settled in the death and showed plenty of courage to poke his head out close to the line and defeat Karalta Dazzler and Good Beginnings by half a metre.

Busted was rewarded for his consistency when the three year old colt (Always A Virgin – Im Sneaky) led throughout in the non-winners race to score a straightforward win over Baldock (Heath Szczypka), who battled on well after sitting outside Busted. Following consecutive second placings to Fioki, Call Me Mouse and Sum One, trainer/driver Kate MacLeod reeled off even splits with Busted to rate 2.00.0 for the 1680 metres.

Hodges teamed up with the Scottsdale trained Riverboat Jasper to bring up a driving double. The Wayne Campbell prepared gelding overcame a tough death seat trip to get the better of the favourite Greysteel before holding off a determined challenge from Our Mels Dream (Nathan Ford). Riverboat Jasper has an excellent career record of 29 – 12 – 8 – 5 ($80,111)  and his last 10 wins have all been at Launceston indicating the $20,000 City of Launceston Cup on 14 December may be a suitable race for Riverboat Jasper.

Star Tasmanian pacer Beautide is the first horse to be invited for the 2014 Miracle Mile. The reigning Miracle Mile champion earned the invitation with a dominant win in a $30,000 free for all at Menangle on Saturday night. Trainer/driver James Rattray moved to the death mid race then rolled to the front shortly afterwards before cruising to an eight meter win in a swift 1.50.7. The last half was covered in 54.5, slightly slower than his best – 53.9 in October 2013.

It is likely that Beautide will have one more race start at Menangle on 15 November before defending his title in the $750,000 Miracle Mile on 29 November.

Tasmania’s best mare will contest the $75,000 Newcastle Mile on Saturday night. Laterron, owned by Zeke Slater and now trained by Shane Tritton, has drawn barrier four in the big sprint and the winner is likely to be invited to race in the Miracle Mile.

Latteron faces a huge task to win the race as mares are traditionally outclassed in these feature races. Her main danger is likely to be stablemate Suave Stuey Lombo. The seven year old gelding is a speed machine and he demonstrated that with two recent 1.50.1 wins against Beautide. Both Suave Stuey Lombo and Beautide are by the all conquering Bettors Delight.

Truly Blissfull is now back with Forth trainer Geoff Smith and he is entered in a $16,275 M0 at Melton on Friday night.

The change to two meetings per week starts with a six race card at Devonport tomorrow night. Topnotch Samson, My Koda Kasper and Regal Idea are all returning from a spell in Race 1. Regal Idea was a close second to Jasper Ruler at the Carrick trials on 27 October. Jasper Ruler was an unlucky second to Kyleasha on Sunday night suggesting that Regal Idea may be the main danger to Gottalovefridays (N5) in Race 1. at Devonport tomorrow night.

Three horses that have a good record at Devonport are first up from a spell in Race 4. Majestic Art (N2) was a handy third to Jabber Jawzzz and Vander Velde at the Hobart trials last Wednesday and a repeat of that run may be good enough for Majestic Art to win this. Peace Corp (N6) was a Devonport winner in June and two of Mon Soie’s last three wins have been at Devonport.

Maggie Malone (JR Mint – Meadow Dale) is having her first race start in Race 5. Trained by Geoff Smith, the 5YO mare may need the race experience after finishing well back in a Devonport trial last Wednesday.

Seven at Hobart on Sunday night

Tattersalls Park is the venue for the seven race card on Sunday night. As mentioned earlier, Jabber Jawzzz (R1 N6) was impressive winning a Hobart trial last Wednesday and will be hard to beat at his first start for Magra trainer Juanita McKenzie. Tizyalator (N11) won at his last start on 31 August. The 4YO gelding was second to the smart 5YO mare Fourstarzzzgirl at the Hobart trials last Wednesday.

Matilda Rocks (R4 N1) will have her first race start for Broadmarsh trainer Chris Howlett. The 4YO mare, by Courage Under Fire, is the first foal for Run Matilda Run, a mare who won 6 races from 45 starts. Matilda Rocks was third of four in a Hobart trial on Monday night. In the same race, Sweet Pea Jasper (N3) returns for Mount Seymour trainer Campbell Watt and Bertils Bliss (N4) is first up in Tasmania for Heath Szczypka. The 7YO mare hasn’t raced since July 2010 but she trialed well at Carrick on 27 October when second to the smart 3YO Karalta Jazzman.

Run Ripalong (R5 N2) won three of his four starts in February and March this year and finished that preparation with a fourth placing in the Devonport Cup. The 7YO Zeke Slater trained gelding looks ideally placed in the Cannonball Charge after a closing half of 57.1 in a Hobart trial win on 27 October.

Vander Velde (R6 N10) is another that brings good trial form at his return to the races. The 4YO gelding was second to Jabber Jawzzz at the Hobart trials on 27 October.