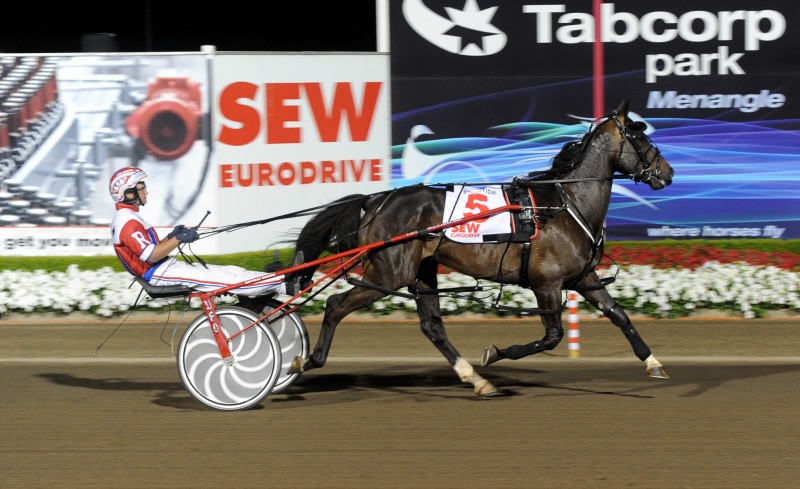 Beautide is a clear favourite to defend his Miracle Mile title after drawing favourably in barrier three in the $750,000 race at Menangle (NSW) on Saturday night.

Beautide is already considered to be as good as any horse in the history of Tasmanian harness racing but a victory on Saturday night will definitely elevate him to the status of ‘best ever’. The Miracle Mile commenced in 1967 and the only other Tasmanian to win the race was Halwes in 1968.

Zeke Slater was successful at Melton last Friday night when his 5YO gelding, Giuliani, won a $16,000 heat of an M0 series and qualified for the $25,000 final on Saturday night (R5 N2). The stablemate, Run Ripalong, death seated in the other heat before weakening slightly for fifth and will start beside Giuliani in the final (R5 N3).

Belliciouslips continued her excellent Victorian form with her third win from four mainland starts when the 4YO Rod Ashwood trained mare won at Melton last Friday night. Bellicioslips is back on home soil this weekend and will be hard to beat in the $10,000 Shirley Martin Mother of Pearl at Launceston on Sunday night (R5 N2).

Partyboy Glenwood, owned by Carrick residents Brian Mackrill and Maree Breward and now trained in Victoria by Andy Gath, is entered in a $16,000 M0 at Melton on Saturday night. Partyboy Glenwood has won two and placed twice from his five Victorian starts. Another Tasmanian pacer, Broadband, has drawn the pole in the same race.

Two young drivers, Mark Yole and Todd Rattray, won four of the seven races at Launceston on Friday night. Yole secured his double with Jodila, trained by his brother Ben Yole and Saab Quality, trained by Marc Butler. Saab Quality is clearly the standout claimer in Tasmania with three wins and a second from his last four starts.

Todd Rattray’s double was behind North West trained horses Robert Moreau and Onemorelaught. Robert Moreau is trained by Geoff Smith at Forth and came with a well trained run to beat Johnnyart. Onemorelaugh is trained at Latrobe by Brett Jaffray and was racing out of class but led throughout from the pole draw.

Stowport trainer/driver Craig Hayes always has at least one smart horse in his stable and the 3YO colt, Always A Show may be his next after a dominant first up win. Always A Show has two wins and a second from four starts and should be a leading contender in the better three year old races as the season progresses.

Other highlights at Launceston included the Melissa Maine trained Hello Good Shanks winning his third race from his last four starts and Tisu Toota again proving what a smart decision Katrina Hillier made when she claimed the gelding about four months ago. Tisu Toota made it four wins and two seconds from his last six starts with another victory at Launceston on Friday night.

Brighton reinsman Nathan Ford drove a treble at Hobart on Sunday night. He trained and part owned the first, Original Art, and after enjoying a perfect sit, Ford unleashed the 4YO gelded son of Art Major sprinted to an easy six metre win. Original Art is racing well with two wins and four placings from eight starts this season.

Ford followed up with a win on the noted sit-sprinter Saloon In Sight for Brighton Training Centre trainer Zane Medhurst. The 7YO gelding has been a good ‘bread and butter’ horse for connections and now has a career record of 72 – 7 – 11 – 11 For $49,415 in stakemoney.

The Ford treble was completed when Dancing Da Vinci won at his first Tasmanian start. The 3YO Art Major gelding had two unplaced starts in Victoria during October before switching to the Christian Salter stable at Brighton. While the overall mile rate was just average at 2.03.1 for 2090 metres, the closing half of 58.1 suggests more wins are likely.

Remember Joe returned from a spell and after spearing to the lead from barrier six was never going to lose the C5/C9 race. Trained at Magra by Juanita McKenzie and driven by Rod Ashwood, the 5YO gelding showed his obvious class with a Melton (Vic) win in July and he appears poised to be one of our best open class horses in the weeks and months ahead as he is foolproof from both start types.

The Burnie season kicks off with a six race card at the Wivenhoe Showgrounds on Friday night. Two trainers with proven records at the tight coastal circuit have a big hand in the first with horses returning from a spell. Colebrook mentor Kevin Denny has Lifeiswhathappens and Odins Call Girl and local trainer Andrew Rawlings has Monarco Playboy and Next Sound. Odins Call Girl was a close third to Sweet Pea Jasper and Go Lika Saab Lombo at the Hobart trials on 17 November and Monarco Playboy won a Burnie trial on Monday night. However, Mickwillrev (N3) will start a short priced favourite as connections try to win three races before 11 January 2015 to qualify for the $10,000 Burnie Cup.

Billy Khan (R2 N1) may finally break through for his first career penalty win. The 8YO Brad Walters (Brighton) trained gelding is having his 99th race start and his two wins have been $3,000 races at Menangle (Jan 2012 and July 3013), which do not attract a career penalty.

In 38 Tasmanian starts Billy Khan has four seconds and three thirds and has been runner up to Faithful Gabby and Hesa Prospect – both would start $1.04 fav in Race 2. at Burnie on Friday night! Also, Billy Khan has come up with possibly the best draw in Australian harness racing being the pole from behind the mobile at Burnie.

The $10,000 Doug Martin Danbury Park Cup (R6) is the highlight of the eight race card at Launceston on Sunday night. The open class discretionary handicap includes recent newcomers to fast class ranks being Aninchofhislife, Riverboat Jasper, Divas Delight and Star Chamber and proven performers Quastor Centurion, Our Chain of Command and Our Mels Dream. Throw in the impressive Remember Joe and Truly Blissfull returning from a Queensland campaign, add the Zeke Slater stable change factor with Sky Tower and the return of last seasons Easter Cup runner up, Grizz Wylie, and the outcome is most punters will probably go wide in this quaddie leg.

The $10,000 Shirley Martin Mother of Pearl (R5) for the mares is also loaded with winning hopes. Belliciouslips steps up in class from three recent Victorian wins, El Jays Magic is tough and can sprint, Arts Bliss was an eye catching second to Remember Joe last week, Spitfire Rose and Tessanzo are quality open class mares and Benediction is sure to benefit from her first up run after a failed breeding attempt.

Last seasons best 2YO filly. Fawzia (R1 N2), will have to be right on her game to win as Karalta Jazzman, Mister Lennox and Always A Show are all well above average.