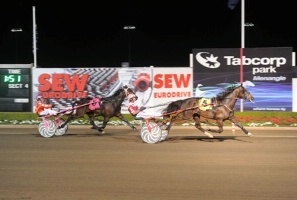 Champion Tasmanian pacer Beautide showed all his fighting qualities when he just failed to claim back to back Miracle Mile’s at Menangle on Saturday night. The diminutive 7YO gelding was overhauled by star New Zealand 6YO Christen Me in the final 100 metres and went down by a head with Victorian up and comer Guaranteed half a length away in third. The time was a race record 1.49.1, which is 1.1 seconds quicker (approximately 15 metres) than the previous mark (1.50.2) set by Beautide last year.

Beautide lost no admirers on the back of his gallant effort. After drawing barrier three, James Rattray let Beautide stride out of the gate as Easy On The Eye, Avonnova and Suave Stuey Lombo engaged in a speed blitz for the early lead. When they settled Beautide rolled to the breeze about 1100 metres out and stayed there until the 400 metre mark when he took over from Easy On The Eye but Christen Me was already making ground after enjoying perfect cover throughout. Beautide never gave up down the long Menangle straight but Christen Me was the better horse on the night.

There appears to be nothing between Christen Me and Beautide with Christen Me leading two to one after three encounters. The first was in last years Victoria Cup when they both charged home from impossible winning positions to finish third (Christen Me) and fourth (Beautide) and Christen Me was runner up to Beautide in the 2013 Miracle Mile.

Tasmanians win at Melton and Menangle

Beautide is obviously the best advertisement for Tasbred pacers and Tasmanian harness racing but he has plenty of lower profile teammates and Devendra and Partyboy Glenwood were part of the team on Saturday night.

Devendra is a stablemate of Beautide and, after being driven in an almost identical pattern to Beautide, proved too strong in the $50,000 Smoken Up Championship over 2300 metres. Devendra, a 5YO gelding bred by the Rattray Family Trust and now owned by Viv Clark, has won four of his eight Menangle starts and may contest some of the Victorian country cups over the next two months.

Partyboy Glenwood raced at Melton on Saturday night. Owned by Carrick residents Brian Mackrill and Maree Breward, the Tasbred 6YO gelding showed little gate speed but was sent forward early by Kate Gath and rolled to the lead at the 1600 metre point of the 2240 metre event. From there, Partyboy Glenwood backed off for the next 800 metres before unleashing a 56.5 last half for a nine metre win in a fast mile rate of 1.55.2. Partyboy Glenwood appears to be thriving in Victoria with three wins and two places from six mainland starts.

Zeke Slater qualified Giuliani and Run Ripalong for the $25,000 M0 Final at Melton on Saturday night and both ran well to finish third and fifth.

Gareth Rattray is back at the top of the Tasmanian drivers table after winning the first three races at Burnie on Friday night with Mickwillrev, Territorial and Nances Thrill.

Mickwillrev went one step closer to qualifying for the $10,000 Burnie Cup on Sunday 11 January when the 4YO gelding survived a tough death seat trip to wear down Odins Call Girl in a quick mile rate of 2.04.3 for 2180 metres around the tight Burnie circuit.

Territorial, a 5YO Topnotcher mare trained locally by Andrew Rawlings, was rewarded for her consistency with a win in the non-winners heat. The $7,000 final is at Launceston on 14 December. Territorial had three unplaced starts as a late season 3YO and returned to racing early this season. With two placings and five fourths from her first 11 starts, the Burnie win was a fitting reward for her consistency.

Brighton trainer/driver Nathan Ford has a genuine contender for the upcoming open class feature races. His 6YO gelding, Star Chamber, was driven a treat by Gareth Rattray to win the $10,000 Doug Martin Danbury Park Cup at Launceston on Sunday night in a track record equaling mile rate of 2.00.0 for the standing 2698 metres.

Star Chamber has continued to improve throughout the 13 months that he has been in Ford’s care. After winning two of his 16 New South Wales starts at Canberra and Wagga, Star Chamber won first up at Hobart for Ford in October 2013. After four more wins Ford took Star Chamber to Melton (Vic) in early September this year for two placings in $16,000 M0 races.  Those two interstate runs appear to have taken Star Chamber to the next level with two open class Tasmanian wins in recent weeks.

Juanita McKenzie trained the first two winners, Mister Lennox and Jabber Jawzzz. Mister Lennox, a 3YO colt by Changeover, was first up after winning two of his seven 2YO starts. He indicated he is ready to mix it with the best of his age this season with an astonishing performance from the death seat.

Mister Lennox was trapped three wide around the first corner and cruised to the breeze at the 1600 metre point of the 2200 metre event. Just when he was entitled to weaken outside smart filly Fawzia, Mister Lennox did exactly the opposite and went into another gear to charge away from a handy field and win with plenty in reserve in a smart mile rate of 2.00.3.

Consistent 5YO mare El Jays Magic was sent out third favourite at $6.20 in the $10,000 Shirley Martin Mother of Pearl. After getting a cheap first half of 65.2, trainer/driver Grant Hodges let her loose and she motored home in 56.2 giving the other mares no chance in the run to the line. Spitfire Rose (Rohan Hillier) was second and Jodila (Mark Yole) third.

Nine races at Carrick on Friday

The Carrick Park Pacing Club will host the first of its three meetings this season at Carrick on Friday in the twilight timeslot. The meeting will be telecast on Sky 2.

The first two races are $5,000 heats of the non winners series that commenced at Burnie last week with the $7,000 final at Launceston on 14 December 2014. There are five first starters in the two heats and three, Proyart, Angel Or Demon and Really Thirsty, have impressed at the trials.

Angel Or Demon (R2 N2) is a 4YO Safari – Ima Merry Jasper mare owned and trained at Sassafras by Shelley Barnes. Angel or Demon was an 18 metre winner of a Carrick trial last Saturday defeating Who Cares Not Me and What A Fine Filly.

Really Thirsty (R2 N7) is a 4YO Safari – Elegant Notch mare trained at Plenty by Justin Campbell. On 17 November, Really Thirsty won a Hobart trial by 12 metres from Blitzegamble and Followthewind.

Three $7,000 heats of the prestigious Eric Reece Memorial series are the highlight of the eight race card at Hobart on Sunday night. Horses will be endeavouring to qualify for the $10,000 final and $8,500 Des and Kay Logan Memorial Consolation at Hobart on Sunday afternoon 21 December.

First starters in the series are Cee Cee Safari (R4 N4) and Mountain Safari (R6 N5). Cee Cee Safari is trainer by Lindsay Brown and the 4YO Safari – Clare Camilla stallion was fourth of six at the Hobart trials on Monday night behind the handy performers Metro Digby, Jerrys Jet and Bobbyjoe.

Mountain Safari is a 4YO Safari – Collarate mare trained by Barrie Rattray at Longford.

Mountain Safari won a Carrick trial on 22 November and was fifth of eight at the same venue last Saturday.

In heat one, Neonjet (R2 N1) is having his first Tasmanian start for the in form Melissa Maine stable. The 4YO Jeremes Jet gelding started racing in August this year and has a win and three seconds from six NSW starts.

Williamlee is another newcomer to Tasmania (R4 N7) in heat two of the Eric Reece series. A 4YO Modern Art gelding now trained at Sassafras by Shelley Barnes, Williamlee has a win and two thirds from three lifetime start in Victoria. Williamlee was a close up third to No No No No No and Laconic Jamane at the Carrick trials last Saturday.