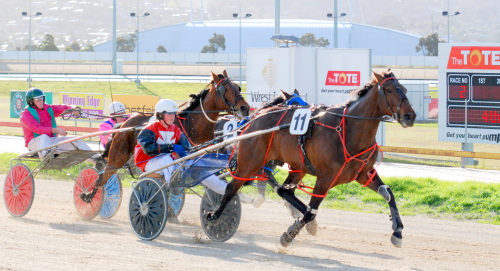 Beautide has not accepted for Saturday night’s Group 1 Ballarat Pacing Cup. It has been reported that the Miracle Mile and Inter Dominion winner is not 100% and therefore will bypass the race. His next race start is expected to be in $400,000 Victoria Cup at Melton on Saturday night 31 January.

Doubles for Mark Yole and Gareth Rattray at Carrick

Mark Yole and Gareth Rattray registered doubles at Carrick last Friday. The first six races were conducted but heavy rain led to the cancellation of the last three.

Yole won with Mister Pinjarra and Saab Quality and now has a perfect driving record on both – two drives for two wins. He joined up with the Zeke Slater trained Mister Pinjarra for at win at Burnie on 28 November and repeated the performance at Carrick.

Mister Pinjarra is a 5YO gelding who raced in Southern New South Wales 43 times for seven wins prior to his first Tasmanian start in late September this year. Mister Pinjarra has won three of his six Tasmanian starts and Slater has again demonstrated that he is as good as any Tasmanian trainer at finding the right races for his horses as they progress through the classes.

The second winner for Yole was the reigning ‘King of the Claimers’, Saab Quality. Yole had his first drive and win on the 8YO gelding at Launceston on 21 November.

Gareth Rattray continued his outstanding form of recent weeks with another double. He commenced with the impressive 4YO first starter, Angel Or Demon, who led throughout and won by 16 metres in a closing last half of 58.3. The Shelley Barnes trained mare is likely to be a short priced favourite to win the $7,000 final of the series at Launceston on Sunday night after drawing barrier two (R1).

Angkristy was the other winner for Rattray, The 5YO Andrew Rawlings trained mare appreciated the significant drop in class compared to her recent runs and after finding the pegs shortly after the start, Rattray controlled the race eventually winning by 5.5 metres.

After a slow start to the season, Rattray is back to his brilliant best. Illness forced the Latrobe reinsman to miss the first two meetings in September and he was winless from 23 drives at the next four meetings before he teamed up with La Ebony Kita for a win at Hobart on 12 October.

Since then, Rattray has regained the form which has enabled him to win nine consecutive state driving titles. He has worked his way to the top of the drivers table with 20 wins. Todd Rattray (18) is next followed by Ricky Duggan (14) and Rohan Hillier (10).

Proyart, a 4YO first starter for Beauty Point trainer/driver Rohan Hillier, created a big impression winning a heat of the non winners series. The gelding death seated for the first lap before rolling to the front and charging away in the home straight for a 15 metre win over Bertils Bliss (Dylan Ford) and Its On Fire (Andrew Arnott), Unfortunately, Proyart sustained an injury during the race, which has ruled him out of the $7,000 final at Launceston on Sunday night.

Barrie Rattray, Todd Rattray, Gareth Rattray and Juanita McKenzie were the leading players at Hobart on Sunday night and each finished the meeting with a double.

Barrie Rattray (trainer) and Todd Rattray (driver) were successful with Blue Pointer and Who Is Hardeen. Blue Pointer continued his charge through the classes with a death seat win in the C5/C7 race. The 5YO gelding has won 10 of his last 17 starts and takes the big step up into open company in the $20,000 City Of Launceston Cup on Sunday night (R7 N8).

Who Is Hardeen may be one of the lesser lights in the stable of leading trainer Barrie Rattray but the 4YO gelding was presented with an ideal scenario when he drew the pole in a heat of the Eric Reece Memorial. Who Is Hardeen was never headed and won by three metres from Ems Choice (James Austin) and Williamlee (Gareth Rattray). The $10,000 final and $8,500 consolation of the Eric Reece Memorial will be at Hobart on Sunday afternoon 21 December.

Gareth Rattray followed his Carrick double with the same at Hobart.  His first winner was Mach My Day ($22.80) for Brighton trainer Daryl Bates. The 5YO gelding arrived late to convincingly win the C3/C4 race by 3.5 metres from Original Art (Dylan Ford) and Deliverthegoods (Matthew Howlett).

Sweet Pea Jasper was the other winner for Gareth Rattray. The 4YO mare, trained at Mt Seymour by Campbell Watt, charged across the field from a wide draw to lead a heat of the Eric Reece Memorial and went on to win by three metres from Metro Digby (Paul Williams) and Note Worthy Lombo (Matthew Howlett).

The first of 15 Monday Sky 1 meetings from Tasmania this season will be conducted at Devonport on Monday night.

In the first race, Claimers have been combined with C4/C5 horses after the Claimer was deleted due to a lack of acceptors. When a Claimer is deleted, or not programmed over a weekend of racing, Claimers can race in C3 and Better races and will be drawn on their claiming price equivalent. An example is Lucky Dave (N2) is a $4,000 Claimer and therefore is drawn with the C4 horses.

The only first starter at the meeting is Parwill (R2 N4). The Brent Parish trained 3YO gelding was a close fourth of six at the Carrick trials on 29 November behind Berri Damour, Safety Girl and Punter Karalta. The trial time was quicker than the times posted by Angel Or Demon and Proyart in their trial wins at the same venue prior to both scoring runaway wins at Carrick last Friday.