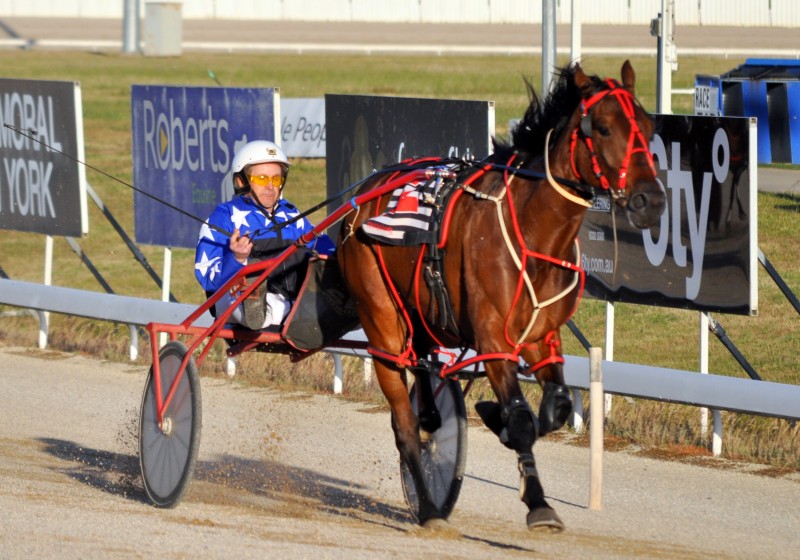 Craig Hayes has always been one of the leading strike rate trainer/drivers in Tasmania and this season he is heading for a similar result. He was seen at his brilliant best at the weekend when he took two to the races for a perfect result. Mickwillrev won the $8,000 Northern Tasmanian Light Harness Association Cup at Launceston on Sunday night and the 3YO colt Always A Show scored an easy 9.5 metre win at Devonport on Monday night.

Hayes, who prepares his team at Stowport, a mere three kilometers from the Burnie harness track, usually has about five horses in work and his strike rate is always high. This season Mickwillrev and Always A Show have been his only starters. Each has won two of their three starts for a combined record of six starts for four wins and a third placing.

Their overall records are also impressive – Mickwillrev 16 – 10 – 3 – 2 – 0 and Always A Show 6 – 3 – 1 – 0. Over recent years, Hayes has continually produced handy horses with similar records. Last season, the 3YO filly Tania Maree had 12 starts for seven wins and three placing. The injury plagued 5YO gelding Mister Sumna has won seven of his 13 starts and Mister Tehaych (66 – 18 – 8 – 3 – $113,272) is another example of why punters should never ignore starters from the Craig Hayes barn.

Two weeks ago the standing start Launceston track record for 2698 was equaled in the Danbury Park Cup and the mobile record was bettered on Sunday night when Blue Pointer was perfectly driven by Todd Rattray to win the $20,000 Tasmanian Medical Laboratories City of Launceston Cup. A 5YO gelded son of Four Starzzz Shark and Penciller, Blue Pointer was having his first start in open company and returned a track record mile rate of 1.59.1.

Blue Pointer has blossomed over the last 18 months under the care of master trainer Barrie Rattray. After only one win in his first nine appearances, the penny dropped for Blue Pointer winning 11 of his last 18 starts. His career record is 27 – 12 – 3 – 3 – $72,010.

Rattray is obviously happy with the way that Blue Pointer has recovered and has accepted for Tasmania’s premier open class race, the $40,000 Smithawards Tasmania Cup, at Hobart on Sunday afternoon.

Doubles over the weekend

Sassafras owner, trainer, driver and breeder Shelley Barnes has been an active participant in Tasmanian harness racing for around 30 years and has a long list of achievements including numerous female training and driving titles and mainland winners such as Highland Pride and Tingarra. In recent times injury has put a stop to her driving career but she has increased her harness breeding activities. However, it was the ‘ownership’ tag where Barnes achieved a career first at Launceston on Sunday night.

Sidmouth trainer Ben Yole scored a race to race double across two meetings. He won the last at Launceston with Livin It Lovin It (Discretionary Handicap) and the first at Devonport on Monday night with the smart mare Jodila (C4/C5). The win by Livin It Lovin It was a fitting reward for Yole who often has multiple starters in open class races and claimers.

Trainer/driver Heath Szczypka occasionally drives the horses he trains and he went that way when he partnered 4YO mare Really Fiesty to an upset win at Launceston on Sunday night. Really Fiesty won an Evicus heat at her second 2YO start for Plenty trainer Justin Campbell. Really Fiesty was transferred to Szczypka during her 3YO campaign and her win on Sunday night was the first from 11 starts for the popular Underwood trainer. Dylan Ford partnered the Szczypka trained Helen Wheels to win the standing start C1 & better at Devonport on Monday night.

Dylan Ford completed a Devonport driving double with Billabong Bertie. The 19 year old Brighton Training Centre trainer/driver took over the lease and training of Billabong Bertie in late November. After a solid fourth in an Eric Reece Memorial heat at Hobart on 7 December, punters were happy to ignore his race record of one win in his last 88 starts and he was well supported to start a $3.50 second favourite.

Nine year old Billabong Bertie appears to be at his best during the festive season. During 2010/11, Billabong Bertie won the Scottsdale Cup in early January and his next win was at Carrick in December 2012 followed by the Devonport win on Monday night.

Rohan Hillier also drove a double at Devonport. He won the C2/C3 with Musselroe Bay for Stowport trainer Andrew Rawlings and the C0/C1 with View Street for Exeter trainer Mark Jones. View Street is a lightly raced 9YO gelding who started racing late in his 6YO season. Jones acquired View Street in February 2014 and the Devonport win was his first from 12 starts with View Street.

Tasmania Cup and George Johnson at Hobart on Sunday afternoon

While Im Corzin Terror represents the class factor, the Tasmania Cup is a race with plenty of depth. Star Chamber (N1) and Blue Pointer (N2) have been exceptional at Launceston in recent weeks. Motu Crusader (N6) is going for three Tasmania Cups in a row and Outback Mach (N5) and Riverboat Jasper (N4) were close up in track record time at Launceston last Sunday.

Tandias Bromac has won five metro class races at Melton over the last five months and may be too classy for her rivals in the George Johnson. The other interstate representatives are My Hayley Robin (N6) and Whisper Jet (N9). My Hayley Robyn is a 7YO mare who hasn’t raced since winning three metropolitan races at Albion Park in October 2013. Now with Brighton trainer Nathan Ford, My Hayley Robin was an impressive trial winner at Hobart on Wednesday night.

Whisper Jet is a 5YO ex New Zealand mare who has won three of her nine starts this season for Great Western (Victoria) trainer Kerryn Manning. At her last start on 29 November at Melton, Whisper Jet finished eight metres from the winner, The Good Times, in the $20,000 Melton Mares Championship.