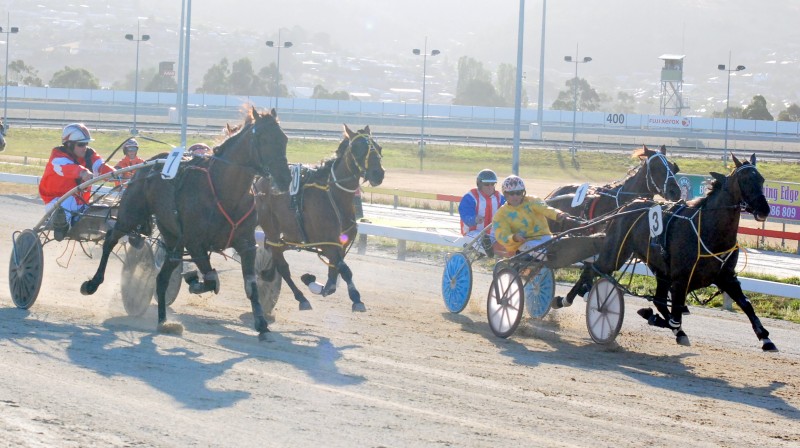 James Rattray will head back to New South Wales in early February. He has purchased a 60 acre property near Exeter, which is only one hour from Tabcorp Park Menangle and 30 minutes from the training and racing facilities at Goulburn.

After Beautide finished second to Christen Me in the $750,000 Miracle Mile at Menangle on 29 November, Rattray relocated to Victoria. Rattray planned to run Beautide in the $100,000 Ballarat Pacing Cup on 13 December but opted out after a blood test indicated that his star pacer may not be 100%.

Across the world there would have been millions of ‘Happy New Year’ wishes exchanged in recent days. Gareth Rattray has probably received his fair share from family and friends and it has panning out exactly that way (Happy New Year!) after he drove seven winners across the first two Tasmanian meetings for 2015.

Now based at Latrobe, 29 year old Rattray has won the last nine state driving premierships and his plethora of winners in recent days sees him 11 clear in this seasons title with 32 wins followed by his younger brother Todd on 21 wins. Rohan Hillier and Ricky Duggan have 15 wins with Dylan and Nathan Ford next on 14 wins. Thirty of the 86 meetings for this season have been conducted.

Forty one year old Spreyton trainer Steve Davis experienced one of the highlights of his harness training career at St Marys on New Years Day when Black Centurian was driven a treat by Gareth Rattray to overhaul Deliverthegoods (Matthew Howlett) in the last 100 metres and win the $10,000 Southern Cross St Marys Cup.

Davis is one of only two trainers in Tasmania licensed to train both gallopers and harness horses. The other is Brighton based Adrian Duggan. Davis was born into a harness family and has branched out into gallopers in recent years.

Black Centurian, a 5YO JR Mint – Mon Poppy Mary gelding, was transferred to the Davis stable late last season and has since won two of his ten starts. Black Centurian is entered in Launceston on Friday night (R3 N5) in a strong C5/C7 race. The other three harness horses that Davis trains are entered at Launceston. Tambros Milly (R2 N2) is a 2YO filly having her first start, Modern Ruler (R4 N1) returns from a spell in the Free For All and Cats And Dogs (R9 N4) is in the Claimer. Davis also trains four gallopers.

To most Tasmanian harness enthusiasts, Fingal may appear to be a rather remote location to train harness horses. Situated 30 minutes east of the Midlands Highway the closest regular venue is Carrick or Launceston approximately one hour and fifteen minutes away. The exception is New Year Day when St Marys, 20 kilometers east of Fingal, conducts the annual race meeting.

The Woods clan, and their cousin Warwick Lowe, train about 30 horses at Fingal on a 550 metre training track. Allistair, Aaron, Craig, Clinton, Don, Geoff, Robert, Scott and Vern Woods and Warwick Lowe love to race at St Marys and this year they had 15 of the 63 starters.

Vern Woods has bragging rights in Fingal this week after winning the Prompt Electrical Pace with Sleeply Boy. A 5YO first starter by Topnotcher out of Miss Windy, the gelding was well supported to start a $3.40 second favourite after winning a St Marys trial on 20 December and finishing second to Benediction in a Carrick trial on 27 December.

Bred, owned and trained by Vern Woods, and driven by John Walters, Sleeply Boy was the first winner for Woods for four years. His previous was Top Windy, a full brother to Sleeply Boy, who also won on debut at St Marys as a 3YO in 2011.

The in form drivers in Tasmania are Nathan Ford and Gareth Rattray. As previously mentioned, Rattray won four at Hobart last Sunday and Ford chipped in with a treble.

Ford’s first winner was the Steve Lukac trained No Spring Secrets. The 3YO Tell All – Spring Ball gelding was first up from a seven month spell after a win from four two year old starts and a close up fourth to Jerrys Jet, Boasson Hagen and Mister Lennox in the $17,000 Big Park Stud Sweepstakes Final. No Spring Secrets tended to over race in the lead and bolted away to win by 27 metres returning a handy mile rate of 2.00.1 for 2090 metres.

Ford completed his treble with Sky Tower in the Claimer. The 10YO gelding has turned his form around in recent weeks under the care of Seven Mile Beach trainer Zeke Slater. His next assignment is likely to be the $20,000 Smithawards Hobart Pacing Cup Final on 18 January.

The $10,000 Harry Holgate Memorial Final (R6 at 9.34 pm) is the highlight of the nine races at Launceston on Friday night. The main chances appear to be the heat winners Who Is Hardeen and Robyn Scherbotsky while Angel Or Demon will appreciate returning to a front line draw.

All races carry Sunday twilight stake money and that has resulted in strong fields throughout the night. Highlights include:

The $10,000 Radio 7BU Burnie Cup is the feature event on a seven race card at the Wivenhoe Showgrounds on Sunday night. Local trainer Andrew Rawlings has three of the ten starters, Musselroe Bay, Punt Road Disco and Johnnyace. Robert Gillie is also a local who uses the Burnie track for all his fast work and he will be hoping Willbe Doc can deliver his first hometown cup.

There are two first starters at Burnie. So You Say (R1 N1) is a 3YO prepared at Flowery Gully by Brent Parish. The Always A Virgin – Anthea filly has a bit to live up to as Anthea’s other two foals are both winners. The Family Guy has won 11 races and Antheas Angel won three.

Mountain Safari (R4 N5) is a 4YO trained by Barrie Rattray at Longford. The Safari – Collarate mare is from a good family. Three of Collarate’s four foals have raced and won. They are Windyman (12 wins), Topoftheclouds (6 wins) and Topofthemountain (1 win). Mountain Safari was third to Like It Is and Regal Idea at the Carrick trials last Saturday.

Information on Burnie and Launceston is available  at the Punters Corner section on the Tasracing website.