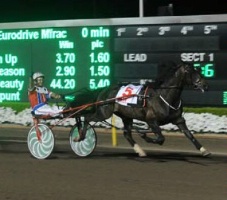 TAB Victoria Cup ‘greatest ever’ – Beautide is the favourite

The $400,000 TAB Victoria Cup is being hailed as the best ever by some long-time harness racing pundits. The Tasmanian superstar, Beautide, is the early favourite in a race where the best from Australia and New Zealand will compete in Victoria’s best mobile start open class race. The race will be conducted at Tabcorp Park Melton on Saturday night (Race 7 at 9:31 pm) and a big contingent of Tasmanian harness enthusiasts is expected to be trackside to watch the action

Beautide is first up after finishing second to Christen Me in the Miracle Mile in late November but the 7YO gelding has trialed impressively in recent weeks. The James Rattray trained and driven champion has been heavily backed and has draw ideally in barrier three on the front line. Beautide will need to be at his best as the race is loaded with quality.

Terror To Love (N7) followed a fourth placing in the Miracle Mile with a win in the $100,000 Cranbourne Cup (Christen Me was second). Franco Ledger (N2) is an ex New Zealander now with Geoff Webster in Victoria. The 7YO gelding has won two of his three Australian starts the latest being the $50,000 Shepparton Cup last weekend.

David Hercules (N9) hails from Western Australia where the 8YO gelding has won three of his four starts this season. He won the $250,000 Fremantle Cup and was second in the $400,000 WA Pacing Cup.

For A Reason (N11) is trained in New South Wales but the leading part owner is Kingston Beach (Tasmania) resident Dean Jones. For A Reason won the Victoria Cup last season and was placed in both the Miracle Mile and the Inter Dominion.

Race times for Sunday twilight harness meetings are issued when race fields are released on Tuesday afternoon. After that, Sky Channel may advise time changes or Tasracing may request earlier race times if they become available.

Tasracing aims to have race times for Sunday twilight meetings finalised by 1:00 pm Thursday. Trainers and drivers should then visit www.tasracing.com.au or www.harness.org.au to confirm the official times or read them in Friday’s edition of Tasmanian newspapers.

If there are any significant changes to Sunday twilight race times, Tasracing will advise trainers and drivers via a SMS text message.

A highlight of the last two weeks in Tasmanian harness racing has been an influx of new trainers and drivers and some that are back after a lengthy break. Trainer Chris Aylett had his first starter at Devonport on Sunday night. The 35 year old Latrobe resident put the gear on Card Shark Kiwi and the 3YO colt ran well to finish fifth only 5.5 metres behind Smileturner.

Hayley Van Noord entered the training ranks recently and Zimero was her first starter at Devonport on Sunday night. Van Noord is based at Glengarry.

Launceston trainer Julie Kirby has not had a starter for almost 12 months but she was back in action at Devonport with Den Jo Art and Ellie Latte.

Devonport trainer Carol Adams has not raced a horse since We Hold The Ace in August 2013 but she started Badtothebone at the local track on Sunday night.

Westbury trainer Rod Plunkett had his first starter for 18 months when Little Jethro death seated at Devonport and proved too good for the opposition with Cardinal Spec second and Punter Karalta third.

Debbie Williams has been absent from the track since October 2013 but the Bagdad trainer knew what she was doing when she took her recent stable acquisition, Ardlussa Express, to Devonport on Sunday night. The 8YO gelding came from well back to charge home and win the Hardings Hotmix Pace.

At New Norfolk on Monday, 37 year old Brighton driver Michael Millhouse had his second and third drives this season after a 13 year break.

On Sunday at Hobart, 66 year old Bagdad resident Ray Saltmarsh will enter the training ranks with Blue Chip Harry. Saltmarsh is a part owner of the 5YO gelding that has an impressive career record of 21 – 6 – 4 – 1. Blue Chip Harry (R3 N10) is likely to be well supported in the Relish Catering Pace Division One where Saltmarsh is using a novice driver concession with Wade Rattray to allow Blue Chip Harry to drop back a class.

The ten race card at Devonport on Sunday night resulted in doubles for three of the leading participants in Tasmanian harness racing – Rohan Hillier, Melissa Maine and Gareth Rattray.

Rohan Hillier trained and drove Arty Miss to win the $10,000 Tasracing – Leigh Plunkett for the C1/C3 mares. Arty Miss is a Victorian mare that was sent to Hillier with this race in mind and Hillier did the rest with an early race move to the lead before clearing out to win by 12 metres from Robyn Scherbotsky (Troy Hillier) and Livia Degerolstein (Natalee Emery).

Hillier made it a race to race double when he drove Chopstix Boris for East Devonport trainer Paul Ashwood. The 4YO gelding led from his pole draw and was never seriously challenged before cruising to a six metre win over Faithful Jet (Gareth Rattray) and Luke Peter (Mark Yole).

Hillier bred Chopstix Boris with his twin brother Troy Hillier, Danny Bennett and Andrew Baxter and initially trained the gelding to four wins and two placings from 10 starts before sending him to Ashwood midway through last season. His record since is four wins and four placing’s from nine starts with his best win being the $30,000 Globe Derby Final (June 2013).

Melissa Maine (trainer) and Gareth Rattray (driver) achieved their double with Neon Jet and Cascade Flyer. Both were heavily backed favourites. Neon Jet ($1.40 fav) led throughout from the prized pole draw at Devonport to register his second win from five Tasmanian starts. The 4YO gelding has also finished second twice.

Cascade Flyer ($2.80 fav) appreciated a significant class drop and was far too good for the other ballots that made up the $3,000 Maxfield Drilling Pace. The 6YO gelding was put into the race early by Rattray  and speared away for a 12 metre win from Devil Of Tyne (Troy Hillier) and Terrorcam (Paul Hill).

The 6YO gelding was a handy third in the $10,000 Burnie Cup at his previous start and relished the hot tempo set by Hes Magic Red, Whisper Jet and The Dip. Driver Gareth Rattray was ‘a mile back’ with Musselroe Bay at the 400 metre point but he weaved his way through the tiring pack and set out after the tear away leaders. Musselroe Bay finished high on the track and forged to the lead in the last 20 metres to defeat backmarkers Whisper Jet (Zeke Slater) and Damitsam (Justin Campbell). Rattray got a double at the meeting when Strange Conduct won the E C Plunkett Memorial.

Bagdad resident Paul Williams trained a double with Iden Makin Time and Ive Got Oomph. Iden Makin Time is a 3YO filly who showed potential last season with three placing’s from her last four 2YO starts. Driver Paul Williams had the filly in a forward position throughout and went on to defeat the early leader Really Thirsty (Justin Campbell) with Iden Mister Ed (Christian Salter) third.

James Austin drove Ive Got Oomph to win the lower points division of the C1/C2 class race. The 6YO gelding had been winless for 27 starts since his only prior win at Hobart in April 2014. Austin took cover behind Springfield Tattoo before peeling off his back around the home turn and going on to an easy 7 metre win over Springfield Tattoo (Gareth Rattray) and Lifeiswhathappens (Ricky Duggan).

Fingal trainer Clinton Woods was rewarded for his faith and patience with Touchwood Luvsta when the 6YO gelding broke through for his first win at his fifth race start in the Verdon Collins Memorial Division One. Touchwood Luvsta had three unplaced runs as a 3YO before illness kept him away from the races for three years. He was back at the races at St Marys on New Years Day but fell on the home corner.

Simplydelightful was just that for trainer Zane Medhurst and driver Ricky Duggan when she won her first race at her fifth racetrack appearance in the David “Boof” Withers Memorial Division Two. The 4YO mare was unplaced at all four 3YO starts but had trialed impressively prior to her return to racing at New Norfolk on Monday after a 13 month spell.

Information on Scottsdale and Hobart is available at www.tasracing.com.au in the Punters Corner section.