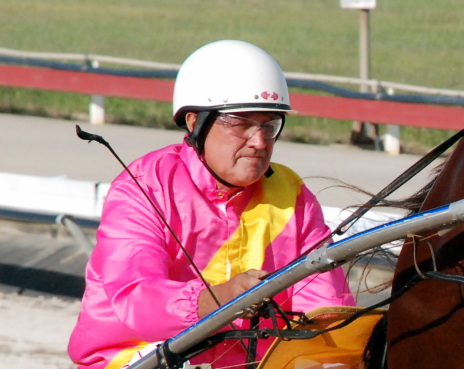 The highlight of the 10 races at Hobart last Sunday was the performance of the Geoff Madden trained Thirlstane King winning on debut in a slippery 1.59.5. The 2YO colt by Modern Art out of Shansue Mod speared straight to the front for driver Paul Hill and won by a comfortable eight meters equaling the best time this season for a 2YO on the Hobart track. By comparison, the best at Launceston is 1.59.1 when Jerrys Jet won the Golden Slipper.

Its no surprise that Thirlstane King has ability as Shansue Mod (Torado Hanover – Mod Humor) has been a grand producer. Shansue Mod never raced but eight of her nine foals have won. Maldon Blaze won 19 races including the Globe Derby Final and seven Harold Park victories. Jay Bardon won 11 of his 23 starts, including his last six in succession, before retiring due to injury. Topnotch Dan won 18 races including the Dandy Patch Final. The other five winners out of Shansue Mod are Maldon Special (4), Hope Floats (4), All About Mod (3), Makldon Supreme (1) and Thirlstane King (1).

Driver Ricky Duggan recorded another double (Giuliani and Angela De Marco). Barrie Rattray trained and drove both Who Is Hardeen and Devendra and John Walters made it two doubles in a fortnight with Karalta Dazzler and Juffs Crossing winning at Hobart.

The semi finals of the Breeders Crown were held at Ballarat last Saturday night and at Melton last Sunday afternoon.

Boasson Hagen, a 2YO colt trained and driven by Christian Salter from Brighton, was the first Tasmanian to attempt to qualify for the $297,000 final. Boasson Hagen settled midfield from his wide front line draw and ran an even race to finish seventh behind the brilliant New Zealander Follow The Stars. Trained by Mark Purdon, Follow The Stars has won nine of his 10 2YO starts and is at prohibitive odds to win the final this Sunday afternoon. Boasson Hagen is first emergency for the final

Other starters in the same semi final with a Tasmanian connection were Mojo Major and Birdy Mach and both qualified for the final. Mojo Major, which is part owned by Paige Ashwood and driven by her son Alex, sat three back on the pegs and finished well to fill third placing. Birdy Mach is a colt out of the Fred and Pauline Barker bred mare Pixel Perfect (Art Major – Amarillen). Birdy Mach qualified for the final by finishing sixth in the semi final.

Barynya faced a task from her wide second line draw and ran a solid race to finish second behind Quick Draft. It was an impressive performance from the Dick Eaves trained and Rohan Hillier driven filly and Barynya is the equal favourite for the $213,000 final on Sunday.

Resurgent Spirit faced a huge challenge from a wide front line draw in a semi final that included the two standout performers Our Sky Major and Bling It On. While those two stars fought out the finish, Resurgent Spirit was driven a treat by Todd Rattray and finished eighth, a mere 13 meters behind Our Sky Major.

The 4YO semi finals were decided at Melton last Sunday and both Tasmanian representatives qualified for the $100,000 finals. Spitfire Rose, trained and driven by Rohan Hadley, drew the pole, settled behind the leader and finished third. Pachacuti made it eight wins in succession after leading from barrier one and controlling the race. .

Australasia’s premier race series for two, three and four year olds, the Breeders Crown, concludes this week with consolations and finals. The Tasmanian representation is:

Resurgent Spirit (R6 N9) looks to have a top winning chance in the $20,000 3YO Colts and Geldings Consolation.

Spitfire Rose (R1 N13) faces a huge task to figure in the finish from her wide draw on the second line when she contests the $100,000 4YO Mares Final.

Pachacuti (R5 N11) finished second to Bit Of A Legend in the 3YO final last year and both are leading contenders for the $100,000 4YO Entires and Geldings Final.

Barynya (R8 N8) has drawn the same alley that resulted in her winning the $150,000 Victorian Oaks earlier this season. She only needs an ounce of luck to figure in the finish of the $213,000 3YO Fillies Final.

Eleven races are set for decision at Launceston on Sunday night. The first includes three promising lightly raced 3YO’s. Fon Ess Kay, Vincent Can Go and Cardinal Spec are all Tasbred and each has three race starts for one win.

Trainers have thrown their support behind the maiden 2YO race resulting in two divisions – races two and eleven. Leading trainer Paul Ashwood has a first starter for Lyn and Mick Maxfield in race two. Trooperdore (Grinfromeartoear – Lotsa Wealth) was a $50,000 purchase at the 2013 APG Melbourne Yearling Sale and won a Carrick trial last Saturday.

Nightsinmontgomery (Courage Under Fire – San Antonio Stroll) is a filly trained at Underwood by Heath Szczypka. She is entered in race 11 and was second to the handy mare Helen Wheels at the Carrick trials on 2 August.