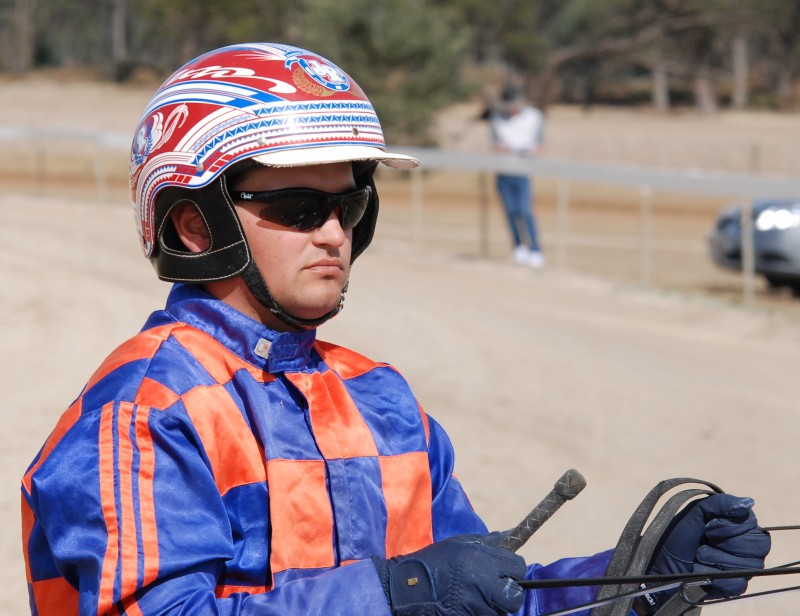 Promising four year old Remember Joe demonstrated his versatility and ability with a barnstorming win at Melton last Friday night. Driver Rod Ashwood worked his way into the clear half way around the home turn and Remember Joe did the rest by charging down the outside to win by three meters. The other Tasmanian in the race, The Majority, also ran on well for third placing.

The Melton win topped off an excellent 13 months for Remember Joe, who won his first race as a late three year old in July last year. Since then, Remember Joe has 11 wins and eight placing from 26 starts for $64,320 in stake money. Early in his career he demonstrated a preference for leading but lately he has also won with a late sprint and working three wide from 1000 meters out.

James Rattray and trainer Kevin Pizutto continued their recent success at Newcastle with a treble last Friday. Their winners were Jolly Dryden, My Entourage and The Empires Sister.

Joshua Duggan decided to give Melton a miss last Wednesday and head to the night meeting at Echuca where he proceeded to drive a treble with Thelove Child, Copper Road and Cardon Merger. It was his second career treble with the first at Cranbourne on 20 April 2013.

Punch Line (by Grinfromeartoear) won a three year old semi final of the Southern Cross series at Globe Derby (SA) on Saturday night. The $60,000 final is at Globe Derby on Sunday afternoon and Punch Line has drawn inside the second line (N7) in Race 5.

Lovelist (Always A Virgin – Lifeline) is a two year old with four wins from seven starts. She was sixth in the $110,000 Vicbred Super Series Final.

Majorama (Art Major – Nellirama) has been a model of consistency since moving to Victoria in June this year. The five year old gelding was second at Shepparton on Tuesday night. His Victorian record is six starts for a win, two seconds and three thirds.

Birdy Mach (Mach Three – Pixel Perfect) also finished second at Shepparton on Tuesday in a heat of the Breeders Crown. His race recors is now two wins and two seconds from four starts and both seconds were behind the Brett Lilley trained Kept Under Wraps.

Veteran Campania trainer/driver Ken Austin caused the boil over of the year when he drove a well judged race on Hero Bromac to win at Hobart on Monday night. A three year old colt by Courage Under Fire, Hero Bromac was first up from a long spell after finishing last at his only two year old start in August 2013.

Hero Bromac started at $77.60 on Tattsbet tote and $71 on fixed odds. It was an outstanding drive and training effort by Austin.

Sixty eight year old Austin drove his first winner in 1962 and he is still an active participant in harness racing. Austin has won many feature races in Tasmania with the 1974 Tasmanian Pacing Championship (The Pride), the 1983 Tasmanian Derby (Smiley Lad) and two Tasmanian Oaks (1984 Denise Neptune and 1990 Lady Allora) heading the list.

The great Smoken Up heads to Globe Derby on Sunday afternoon for his farewell run on South Australian soil. The $8,000 Free For All is Race 6 at 3.58 (AEST) and the 11 year old marvel has drawn number two on the second line (N8).

The Majority (N6) and Broadband (N9) are entered in Race 2 at Melton on Saturday night and both only need to repeat their last start performances to figure in the finish.

The Queensland metropolitan meeting for this week shifts from Albion Park to Redcliffe for the running of the $40,000 Redcliffe Gold Cup. The Tasmanian bred and owned Truly Blissfull has drawn barrier three in the Cup (R5). Truly Blissful won a $4,500 race at Albion Park last Friday but the Redcliffe Cup is a much stronger race. The win on Friday by Truly Blissfull (Blissfull Hall – Really and Truly) took the seven year old geldings stake money to $101,639. Truly Blissful is owned by North West Coasters Geoff Smith, Neil Armstrong, Mark Kable and Dean Hart and Victorian Leo Kooman.

Some smart horses are entered. Pachacuti is the standout again and he has drawn perfectly in barrier one in Race 6 as he attempts his seventh consecutive win in Tasmania before heading to Victoria for the Breeders Crown heats on Sunday 17 August.

Handy three year old Franco Sheffield returns in Race 5 (N3) after an unlucky sixth in a $20,000 race at Melton on 19 July. He will attempt to improve on his Tasmanian record of six wins and two seconds from eight starts.

Juanita McKenzie trains Franco Sheffield and she also has an excellent winning chance with Something Eyre (N1) in Race 2. Something Eyre is first up from a 14 week spell but won twice and placed three times from five starts during March and April.

Play Apple Tree (N2) is an interesting starter in Race 11. Trained by Dylan Ford, the five year old mare has not started for two years and four months but was an above average juvenile with three wins and three places from eight starts. Play Apple Tree was second to Cloudy Delight in the $30,000 Evicus Final for two year old fillies. She trialed at Hobart on 23 July and was second (beaten 12 meters) to Something Eyre.

Information on both Launceston and Hobart will be available at Tasracing Punters Corner.