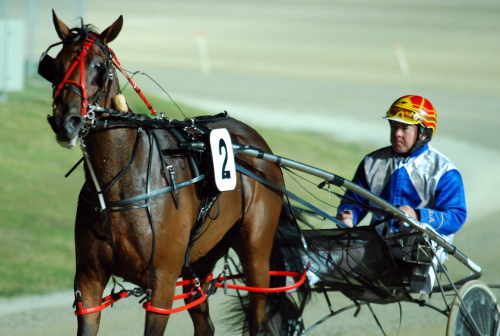 The judgment of Beaconsfield breeders Rick and Naomi Hinds was vindicated when the three year old filly Punch Line won the $60,000 Southern Cross 3YO Fillies Final at Globe Derby (SA) on Sunday afternoon. Punch Line is a daughter of Lifeline, who was purchased by Rick and Noami in September 2012.

Broadband, trained by Rod Ashwood and driven by his son Alex, backed up from an impressive first up fourth at Melton on 19 July with a solid third at the same venue on Saturday night in a $16,500 M0.

Brian Buster Brown, Underdog and Empty Envelope were winners in Queensland during the week. Brian Buster Brown was bred by the Jetsonville Park Syndicate and raced in Tasmania until January this year when he was claimed after winning a claiming race at New Norfolk. In 14 subsequent Queensland starts, the 7YO gelding has won twice with the latest win being at Redcliffe last Wednesday. His career record is 99 – 17 – 12 – 11 – $87,718.

Underdog was bred by Paige Ashwood and Jamie Cockshutt and he proved his class by winning the $30,000 Globe Derby Final for Tasbred 3YO colts and geldings. Underdog was relocated to New South Wales as a late 4YO and then on to Queensland in January this year. He won at Albion Park last Friday. The 8YO gelding has won three of his 25 Queensland starts and his career record is 116 – 14 – 17 – 13 – $123,345.

Empty Envelope was bred in Victoria but commenced his racing career in Tasmania with Grant Hodges as a 5YO and won eight of his first 11 starts. He continued to race in Tasmania before going to Victoria early this season as an 8Y0. Empty Envelope has raced in Queensland for his last seven starts and registered two wins, including a victory at Redcliffe last Wednesday. His career record is 57 – 12 – 12 – 8 – $92,342.

The winners keep coming for Alex Ashwood. This week they were Dartmoor at Charlton last Wednesday and Artoc at Bendigo on Thursday.

Race 7 at Geelong has a strong Tasmanian influence. It is a repechage of the Breeders Crown for 2YO colts and geldings and Dick Eaves has entered the recent Devonport winner One Mans Pass. Bred by Michael and Carol Lefevre at Pyengana and now owned by Lloyd and Judy Whish-Wilson, who also race the star filly Barynya, One Mans Pass (N5) will be attempting to qualify for the $20,000 Breeders Crown semi finals at Ballarat on Saturday week (16 August).

Birdy Mach (Mach Three – Pixel Perfect) is in the same race and has drawn inside the second line (B8).

Boasson Hagen, trained and driven by Christian Salter, has already qualified for the semi finals on Saturday week after winning the Tasmanian heat at Launceston on 13 July.

Le Premiere is entered in a $6,275 C0 (R2 N3). The Brad Walters part owned and trained 3YO has been transferred to Andy Gath for what is intended to be a short campaign in Victoria. The colt has been racing in career best form with a win and two thirds from his last four Tasmanian starts. His last start third to Resurgent Spirit, beaten six meters, was arguably his best performance. It is a strong race on Thursday night with Lake Eyre, the runner up in the Tasmanian Derby, drawn barrier two.

Remember Joe (N6) is aiming for two successive Melton wins in Race 6, a $16,500 M0 and better standing start, where he will line up on the 10 meter mark. Ex Tasmanian Turnpike Cruiser (N10) is in the same race.

Two former occupants of the Michael Laugher barn are scheduled to race at Menangle on Saturday night. Tony Macarony (R1 N2) was a last start second at the same venue on 7 June while Rustle Murray (R7 N8) will be having his first Menangle start for leading trainer Shane Tritton.

It’s another big card of Sunday twilight racing from Tasmania with 11 races set for decision at Launceston. The highlight is the appearance of Resurgent Spirit in Race 6 where the 3YO gelding will be having his first start for leading trainer Barrie Rattray before heading to Victoria for the Breeders Crown semi finals at Ballarat the following Saturday (16 August). Resurgent Spirit has won 15 of his 19 starts but this is by the best field he has encountered and it should prove to be a solid lead into the Breeders Crown series.