Weemalanews back in winning form 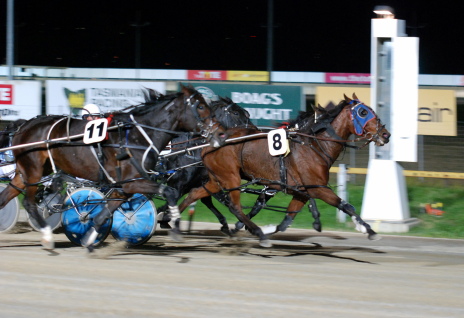 Well bred harness racing mare Weemalanews ended a long run of outs when she powered home to win the Athol Bennett Stakes over 2090 metres at Tattersall’s Park in Hobart on Monday night.

The Paul Medhurst-trained mare’s previous win was 16 months ago but connections were always confident she would break back into the winner’s circle.

Monday night’s effort was courtesy of a superb drive from Simon Ford who had her well placed midrace and when a gap appeared in the home straight he guided the mare through the opening and she finished the race off well to grab victory in the shadows of the post.

Weemalanews (Jet Laag-Weekly News) spent about seven months off the scene last year from March to October due to a niggling back injury that Medhurst eventually sorted out.

Listen to what trainer Paul Medhurst had to say about Weemalanews’ overdue win – click here.