Weir has the right man for the job 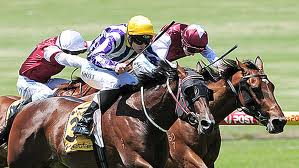 VICTORIAN thoroughbred trainer Darren Weir knows what it takes to prepare a horse to win an AAMI Hobart Cup having achieved the feat three times in the space of four years.

Weir won the race with True Courser in 2006 and he then prepared back-to-back winners with Offenbach in 2008 and Gotta Keep Cool in 2009.

On Sunday he will saddle up Hurdy Gurdy Man that comes off a minor placing in the Terang Cup last Sunday in which he finished strongly to finish third behind Titch and Lordoftheparrots, beaten almost two lengths.

But it was the five-year-old gelding’s win in the Woodford Cup over 1700 metres at Warrnambool on December 30 that convinced Weir he was a Hobart Cup prospect.

The gelding followed up with a second at the same track in the Koroit Cup a week later and then he ventured to Flemington where he was a game third in an open handicap over 2000 metres with Glen Boss aboard.

It was after than run that connections began thinking about turning their attention to next Wednesday’s Mornington Cup but Weir convinced them they would be better off concentrating on Tasmania.

Hurdy Gurdy Man , by Street Cry out of the Bluebird mare Abalone, was flown to Tasmania on Wednesday and has been resting up and doing light trackwork at David and Scott Brinton’s stables at Seven Mile Beach.

Hurdy Gurdy Man has been heavily backed to win the race firming from his opening quote of $7.50 into $4.50 with most corporate fixed odds bookmakers.