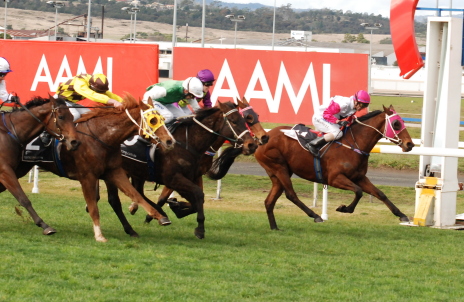 PREMIER trainer David Brunton was not getting carried away with the win of Lady Lynette’s half-brother Rapscallion at Mowbray last Sunday but he was upbeat about the chances of the gelding winning more races.

Rapscallion (Telesto-Queen’s Own) produced a powerful finish to grab victory in a three-way photo-finish in the Happy Birthday Micky Hutz Maiden over 1400 metres.

With Anthony Darmanin aboard, Rapscallion recovered from pulling hard early and some light interference turning for home to get the judge’s nod over My Cool One and Benditlikebeckett.

It was the three-year-old gelding’s fifth start and a big improvement on what he had shown at his four previous attempts.

“He is definitely One of Lady Lynette’s poor relations but he is only lightly raced and he is improving all the time,” Brunton said.

Rapscallion was knocked down to Brunton for $25,000 at the 2010 Tasmania Magic Millions Yearling Sale so he still has a way to go before the gelding has repaid the debt.

“We’ll just keep plodding along and see where it leads but I do think he has a couple more wins left in him.”

For one of Rapscallion’s part-owners, Bruce Craig, it was his first winner in 18 months.

“I said to Bruce (Craig) after the race that it’s good to be patient.” Brunton quipped.