Wells a rap for Aslanyon 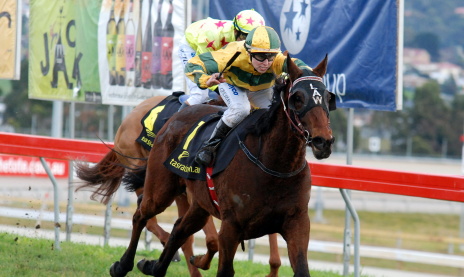 ASTUTE trainer Leon Wells predicts a bright future for well-bred three-year-old Aslanyon that ended the season with a convincing win in the Raine & Horne Class One Handicap over 1400 metres on the Derwent track at Tattersall’s Park in Hobart last Sunday.

The lightly raced son of former VRC Derby winner Amalfi was having his fourth run this preparation and had given an indication at those outings that a win was just around the corner.

This latest victory came courtesy of a gem of a ride from Victorian apprentice Rhagan Cross who recently had her indentures permanently transferred to Wells.

Aslanyon showed no early speed and Cross had no option but to settle her charge worse than midfield but he was always travelling well and under a hold.

Cross had to make a split-second decision nearing the home turn when Aslanyon closed so quickly on the leaders.

She elected to drive her charge through a gap instead of taking hold and easing to the outside.

It was a winning move and one that earned praise from her new master.

Aslanyon was purchased by Wells at the 2010 Melbourne Autumn sale for only $9000.

It ws the first of three winners for Cross who also scored aboard Libbys Girl for trainer John Luttrell and Banca Mo for the state’s premier training combination of David and Scott Brunton.

Listen to what trainer Leon Wells had to say about Aslanyon’s win – click here .