Wells not surprised at bolter’s win 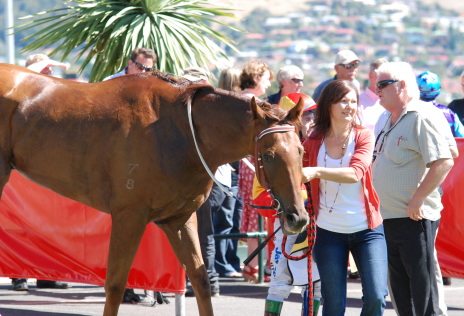 ONE of Tasmania’s top thoroughbred trainers Leon Wells was not surprised when his lightly raced three-year-old Reefview Rocka scored an emphatic win in the opening race on the eight-event card at Tattersall’s Park in Hobart today.

Reefview Rocka (Rasit Yetimova) scored a runaway win despite being sent out the despised rank outsider in the field of seven at $36.60.

The gelded son of Rock Of Cashel-Tichiba hugged the rail from the outset and despite being pressured by two horses from the 700-metre peg to the top of the home straight he burst clear and went on to defeat the favourite Faster Than Cows by 3-1/4 lengths with first-starter Knee Highs a close-up third.

The gelding was friendless in the betting ring and was the biggest drifter on the TOTE but Wells said the horse had excelled on the training track and he was far from surprised by the win.

Listen to what trainer Leon Wells had to say about Reefview Rocka’s maiden win – click here .