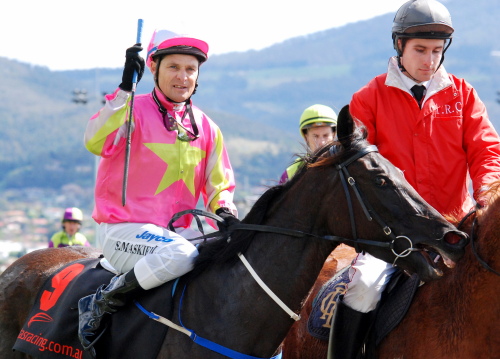 WELL bred filly Jeda’s Quest notched her first win in a maiden over 1100m at Tattersall’s Park in Hobart today and her trainer Leon Wells immediately predicted she had a bright future.

Jeda’s Quest (West Quest-Broadway Illusion) came from near last at the turn to score by over a length from first starters Tango’s Gee and Gee Gee’s La Quita.

The three-year-old was having her second start this preparation coming off an eye-catching first-up third on her home track at Devonport three weeks ago.

It was a masterful ride by leading jockey Stephen Maskiell who persevered with rails runs to save valuable ground from the 500-metre peg and when he called on the filly for the supreme effort 200m out she delivered the goods.

Listen to what trainer Leon Wells had to say about Jeda’s Quest’s maiden win – click here .