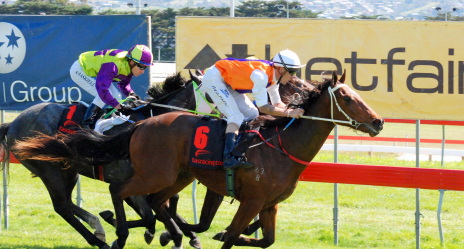 WITHIN minutes of star Tasmanian mare Lady Lynette winning a Group 2 race at Flemington, the David and Scott Brunton stable unveiled another potential top liner on home soil in the form of three-year-old Westering Home.

he powered home to win the Raine & Horne 3YO Maiden Plate over 1100 metres at Tattersall’s Park in Hobart.

The gelded son of West Quest-Scottish Lass settled near last but when rider Michael Guthrie called on his charge to improve 550m out he made ground steadily.

In the home straight he knuckled down to his task and went on to score narrowly from race leader Sudden Glory with Gee Gees Cashcard.

Westering Home ventured to two trials prior to racing for a second at Longford before winning a 900-metre trial at Tattersall’s Park last Tuesday in what was the best time of the day.

Guthrie said the gelding had a bright future.

“He only did what he had to do to win today. He’s a night horse going places,” Guthrie said.

“He went to them easily and when he didn’t quite know what to do I gave him a little flick (with the whip) and he finished the job.”

“When we pulled up he just pricked his ears and gazed around as if he’d just come onto the track,” he said.

David and Scott Brunton were in Melbourne so oldest son Stuart Brunton was in charge of the team and he was delighted with the three-year-old’s debut effort.
Listen to what Stuart Brunton had to say about Westering Home’s debut win – click here .