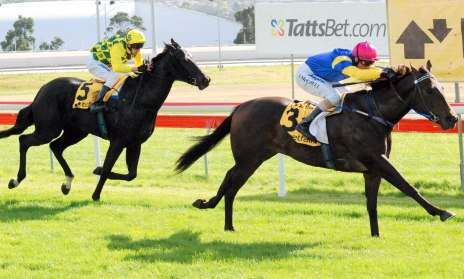 CLASSY two-year-old Western Hero showed why he is one of the state’s best juveniles when he powered home to win the $30,000 Thorn Lighting Autumn Classic over 1100 metres at Tattersall’s Park in Hobart today (Sunday).

Western Hero (Brendon McCoull) was resuming from a n eight-week let-up that came after a three-race campaign that netted two minor placings in listed races and a game fourth in the $100,000 Gold Sovereign won by the Anthony Freedman-trained Cheyenne Warrior.

The Terry Evans-trained gelding won at his first two starts that included the $30,000 Alexandra Plate on debut.

Hew won at his subsequent outing before ending his first campaign with a second to Kenjorwood in the Silver Ingot in Launceston in late November.

Evans said Western Hero had spent only 10 days in the paddock after his summer carnival campaign.

Western Hero (West Quest-Horkins Nancy) is owned and raced by the Horse Racing Tragics No 2 syndicate managed by Adam, Upton.

The gelding has had seven starts fort three wins and as many minor placings for just over $88,000 including owner-breeder bonuses with this latest win netting connections a cheque for just over $22,000.

Listen to what trainer Terry Evans had to say about Western Hero’s latest win – click here .