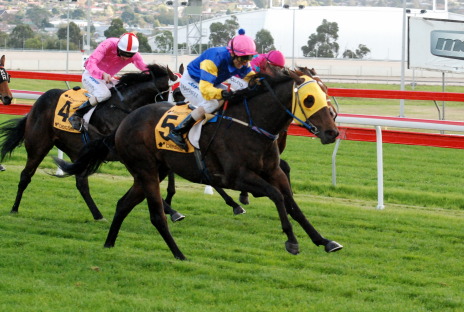 TALENTED juvenile gelding Western Hero all but clinched the title of Tasmania’s best two-year-old when he powered his way to an impressive win in the $30,000 Denis Ryan memorial Autumn Classic over 1200 metres at Tattersall’s Park in Hobart.

McCoull had Western Hero parked three-wide from the 700-metre peg but the gelded son of West Quest was always travelling like the winner.

When McCoull called on his charge to extend at the top of the home straight he quickly collared the leaders and proved impassable as he cruised to the post to score by a length from Keep The Cash with Our Clangalang a closing third.

It was Western Hero’s fourth win from only eight starts with his other feature wins coming in the $25,000 Alexandra Plate on debut and the $30,000 Premier Classic just prior to winning this race.

Western Hero is trained at Brighton by Terry Evans who was not at the track owing to his commitment to attend the sales in Melbourne.

However, one of the gelding’s part-owners and Horse Racing Tragics’ syndicate manager Adam Upton was on hand to deal with the media.

Listen to what part-owner Adam Upton had to say about Western Hero’s latest win – click here .