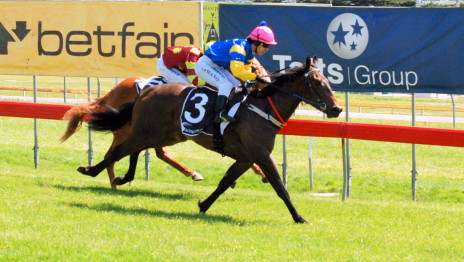 WESTERN HERO has the honour of being Tasmania’s first two-year-old winner of the season and what a win it was at Tattersall’s Park in Hobart today.

The Terry Evans-trained gelding outgunned the John Keys-trained filly Golden Aces to score by three-quarters of a length with Izza Belle almost three lengths away third.

Western Hero (West Quest-Horkins Nancy) showed good early speed to share the lead with Golden Aces that made full use of her inside barrier (3) but 200 metres out it looked as if Golden Aces had the race in her keeping.

But under strong riding from jockey Shuji Amano Western Hero kept putting it to the leader and eventually gained the upper hand and was drawing clear on the line.

The gelding was purchased by Adam Upton for $11,000 at this year’s Tasmanian Magic Millions Yearling Sale in Launceston on behalf of the Racing Tragics Two syndicate of which Upton is manager.

Western Hero went into the race on the back of a trial win in Hobart 12 days earlier in which he defeated Izza Belle (Bel Esprit-Zeinab) by a short half-head.

There was a lot to like about the effort of runner-up Golden Aces that is by Strada from the Snippets mare Hop.

She showed good speed to lead band stuck on well over the concluding stages.

Izza Belle will take a lot of benefit from the outing and the Michael Voss-trained Little Sheeka (God’s Own-Twilight Dance x Snippets) ran on gamely in the straight to finish fourth.

The Adam Trinder-trained colt Famous Faces (Clangalang-Perfect Fasique) dwelt at the start and settled midfield on the fence. He was held up in the home straight but ran on late to finish fifth.

Listen to what trainer Terry Evans had to say about Western hero’s debut win – click here .