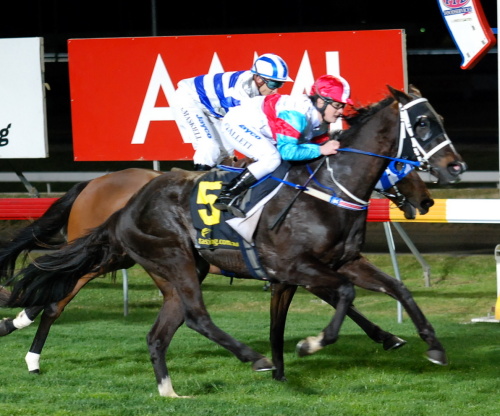 Lucidly sat outside of star performer Conquering over the final 600 metres and with a luxury light weight of 53kg and a huge 12kg advantage over Conquering White’s charge forged clear close to home to secure victory by a long neck.

“That was a terrific win by my horse but at the same time it was a great performance by Conquering. I’d like to be able to bottle the blood of both horses,” White said.

“The big pull in the weights was a telling factor over the last 200 metres and it was a great ride by the apprentice Crystal Hallett who listened to my instructions and carried them out to the letter,” he said.

It was Lucidly’s second win on the Launceston track in succession and White said the seven-year-old gelding could be close to a spell.

“I’ve been toying with the idea of giving him a break and bringing him back for a crack at a weight-for-age race over 1400m or a mile (1600m),” White said.

While Lucidly’s win was full of merit there were plenty of accolades for the champ Conquering’s effort under his big weight (65kg).

The Charlie Goggin-trained eight-year-old looked outstanding in the parade ring and raced accordingly.

His rider Stephen Maskiell urged him forward at the start to lead and he held sway to the 600m where Hallett urged her charge to cruise alongside to keep the pressure on and make Goggin’s horse carry his huge impost.

Conquering is likely to have his next start in the Seymour Cup (1600m) in Victoria next month, which has been his main mission this preparation.

Listen to what jockey Stephen Maskiell had to say about Conquering’s courageous effort – click here .