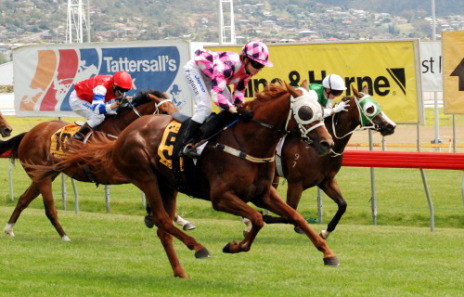 BRIGHTON trainer Gary White has a stable full of promising young horses this season and one that looks set to break his maiden status at The TOTE Racing Centre in Launceston tomorrow night is lightly raced three-year-old Not Guilty.

The gelded son of Mr Innocent has ventured to the races twice for a debut fifth in Hobart and a last-start fourth at the same venue, coming from last on the turn to finish only four lengths from the winner Predator that is being mooted as a Tasmanian Guineas prospect.

Both of the gelding’s efforts have been over the short trip of 1100 metres but stepping up to 1200 metres will be a more suitable journey.

“I’m very happy with Not Guilty’s progress and while I thought he should have won at least one of his two starts so far, I think whatever beats him on Wednesday night will win the race,” White said.

“Not Guilty has shown promise from day one, so if everything goes to plan tomorrow night he should be very hard to beat,” he said.

White admits he hasn’t got a ready made AAMI Hobart or Launceston Cup horse in his stables but he is hoping Speedo Zap can measure up this time in and maybe have a peek at running in either or both major cups.

Speedo Zap will line up in a benchmark 68 handicap over 1400 metres in Launceston tomorrow night (Wednesday) at what will be his third run this time in.

“He should be competitive tomorrow night and if he does what I expect then we’ll proceed with a cups program,” he said.

While White’s Cup prospects are thin on the ground he is expecting his talented three-year-old filly Heaven’s Choice to make an impact in some of the feature three-year-old event ranging in distance from 1100-1600m.

He also has some promising two-year-olds including last start winners Smart Catch and Bertie’s Bells.

He could also take a two-pronged attack into the Tasmanian Derby with Barysh Quest and last-start winner Colonial Gold.