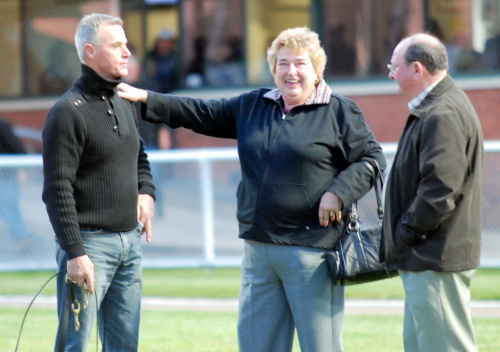 Charismatic trainer Gary White was a relieved man in Launceston last Thursday night after his promising filly Ammolite broke her maiden status in the 3YO Maiden Plate over 1100 metres.

The filly produced a powerful finish to score a narrow but encouraging win over former Victorian Combien and outsider Faithful Gee Gee.

White had planned to run Ammolite at the opening night meeting of the season a fortnight earlier but in the week leading up to the race she was involved in a mishap that threw the original plan out the window.

“She (Ammolite) got hold of the buckles of the rope which got caught in her mouth and she managed to flip herself backwards, right in front of the owners after I told them she would win on the weekend,” White said.

“One of the owners was due to fly to India that afternoon, so when he saw that you can imagine how he felt,” he said.

White also had a few anxious moments soon after the start of the race.

“She was further back than I expected.”

“I thought she was going to be held up for a run. She was fifth early when the run presented itself then it closed coming to the turn but over the last 100 metres she really sprouted wings.”

“I was really pleased. She has good ability and when she learns to relax and let down I think she has a future” White said.

Ammolite was ridden by apprentice jockey Ronan Keogh who finished the night with a well earned treble as he also saluted on team Brunton’s Our Super and the Terry Roles-trained Racers Eight.