Williamson one of the best 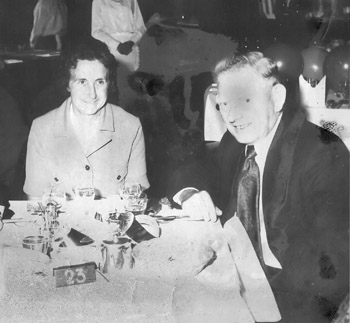 Hilda Williamson is best remembered as one of Tasmania’s greatest trainers, certainly in the very top echelon of breeders and set a standard that few have equalled.

Her endeavours in greyhound racing in Tasmania make her a worthy inductee into the Hall of Fame.

Born Hilda Rosie Hinds she met Jack “Derby Man” Williamson at Rowella and they were married in 1939.

Jack was a woodcutter, waterside worker and from 1954 a bookmaker and initially both Jack and Hilda only had a passing interest in racing.

But in 1947 the Williamson’s moved from Holwell to Beaconsfield, where Jack built a house on a quarter-acre block that they bought for 25 pound ($50).

Hilda made her entry into greyhound racing without even knowing it because Jack bought Hilda a brindle greyhound bitch called Flying Coonega as a birthday present in 1949.

It was out of the blue but it was to lead to a life in greyhounds.

Hilda did seasonal work but was basically a homemaker, so had the time and the nature for handling greyhounds.

When she leased two dogs, Main Birch and Conamon Birch, from breeder Alan Skeyhill she was hooked.

They only ever had three dogs at Wells Street, training their dogs on a skin or hand held lure at the back of the orchard behind their property.

But in 1951 Jack and Hilda bought 10 acres in Crowther Street Beaconsfield for 600 pounds and with the necessary extra space their involvement in dogs increased enormously.

They were soon breeding and handling dogs up to fifty at a time.

Hilda liked her own company and spent so much time with the dogs and did all her own checking.

She walked her charges three miles of a morning, after which they had a break before feeding.

In the afternoon the dogs free galloped and again they had a break before feeding.

Her kennel tenants free galloped in paddocks that were speckled with sheds, trees and a range of kennels.

The constant ducking and weaving taught them track sense and an ability to handle the hustle and bustle of racing.

Hilda Williamson had so many winners, that only the elite can be covered here. She made the “Ophir” moniker famous, named after the nearby Ophir Goldmines.

Inaugural Hall of Fame bitch Ophir Doll obviously heads the list. Back to back winner of the 1961-62 Hobart Thousands (still the only dog to win it twice), she also won a Sprint and Distance Championship of Tasmania.

Most of her 35 wins were at the TCA but she did break the 685 yard track record at Bulli in NSW.

Going for her 3rd Hobart Thousand in 1963, she made the Final and ran 4th … and to who? None other than her litter sister Ophir Gold, who Hilda had sold to George Elderfield, but still trained her.

Williamson won three Thousands in a row with two bitches from the one litter and in Ophir Gold’s final she also bred Sunny Treasure and the great Lucky Apex that also made that final.

Ophir Kitty (36 wins) was the dam of these Hobart Thousand winners but she also was a great race dog, winning the 1956 Sprint Championship of Tasmania and she was placed in a Puppy Championship, Devonport Cup and Gold Collar.

Ophir Pet won 34 while Ophir Glitter won the 1967 Launceston Cup for Hilda when trained by Tullah Redman and Royal Avenue won the State Final of the 1969 National Distance, while prolific winner Ophir Treasure won a heat and semi of the 1959 Hobart Thousand before finishing 3rd in the final.

Hilda Williamson not only bred all of the aforementioned, but also many other top class chasers that were purchased and raced by others.

Ophir Kitty’s dam Happy Barrier was the initial prolific producer, but so many of these great bitches were also wonderful broodbitches, in particular Ophir Kitty, Ophir Treasure and Ophir Glitter.

Hilda Williamson died on June 28 1980. While she entered greyhound racing by accident her entry into the Hall of Fame is testament to her ability as a trainer-breeder.

For someone who was self-taught in all matters greyhound and always understated her own ability and achievements, she was truly one of the top trainers and breeders of her time.