Buckle Up for Thursday night Final 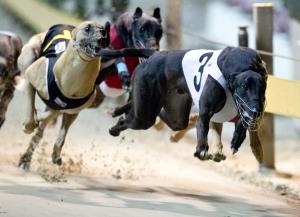 Buckle Up Wes fans are advised to put their seat belt on for this one.

The star Tasmanian greyhound is into his fourth Group One final for the year after winning his heat of the Brisbane Winter Cup at Albion Park last week. The Ted Medhurst- trained dog was having his first start at Albion Park and led all of the way to win in a time of 30.09 for the 520-metre trip.

He has drawn box four for Thursday night’s final, which carries prizemoney of $75,000 to the winner and is expected to improve on his heat time. The final has attracted greyhounds from four states with favoured runners Awesome Project (Darren McDonald) and Flash Reality (Tony Brett) both suited by their box draws. Buckle Up Wes has won $344,535 for his North-West owners Robyn Johnson and Sharon Sutton with his major victory coming in the Australian Cup at the Meadows in March.

The Winter Cup is race seven at Albion Park at 8.44pm.