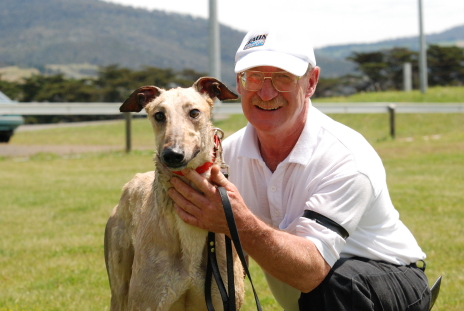 WHITEMORE greyhound trainer Leigh Wood was saddened recently with the retirement to stud of one of his best performed kennel tenants Thirteen Black.

But the trainer is hoping his in-form middle distance dog Three Tradies can fill the void.

Three Tradies made it three wins in succession when he powered his way to victory in a grade five event over 599 metres at Tattersall’s Park last week.

He won over 452 metres in grade five company at Devonport on November 15 and followed up six days later with a resounding win in a grade five over 600 metres in Launceston.

“Now that he has got some racing under his belt he looks like he might develop into a handy middle distance dog,” Wood said.

“I’m half hoping this dog can take the place of Thirteen Black that was retired to stud recently after suffering an injury.”

“I took Thirteen Black to Launceston for a race but about 15 metres into the race he cracked a bone in his hock and while we were able to get it pinned successfully it spelled the end of his racing career.”

“But he will stand as a sire here in Tassie and we are hoping he can be as successful at that caper as he was at racing,” Wood said.