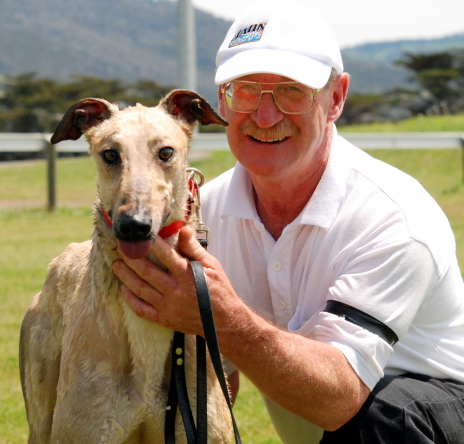 TRAINER Leigh Wood recognises a promising pup when it surfaces and he has n o qualms about predicting a bright future for one that he owns and bred.

Ukulele Lad has emerged as one of the state’s brightest prospects following his win in the Xmas Gift final over 452 metres at Devonport last week.

The well bred dog made it three wins in succession when he demolished a handy field in the Gift final.

He began brilliantly from box four and had a two-length break at the top turn and extended that lead into the home straight.

‘The son of Baywatch Boy-Touch And Go hit the line about six lengths clear of his nearest rival King’s View with Premier Magic a close-up third and well clear of Irish Guard that grabbed fourth just in advance of Brindle Bolta..

Ukulele Lad has won half of his eight starts and he placed in the other four outings.

His time of 25.83s was only one-hundredth-of-a-second outside his personal best that he set in winning his Xmas Gift heat a week earlier.

“I’m very pleased with what this dog has shown so far and hopefully he can go to the next level,” Wood said.

Ukulele Lad is not what professional breeders would call fashionably bred, being by a dog that Wood used to train.

“This dog is home grown because the sire (Baywatch Boy) was trained by me some time ago and the broodbitch is one of mine.”

“We got a few from the litter that can run but Ukulele Lads is clearly one out of the box.”

Ukulele Lad was a late bloomer but Wood says that was more by design.

“I never looked at this dog to race until he was two years old.”

“He ticks a lot of the good boxes this dog.”

“He is very sensible, he is a good beginner and has good early speed plus he’s got good midrace pace and he’s strong at the finish.”

“There’s not much more you would want from a dog,” he said.

Wood was always confident Ukulele Lad would make a name for himself.

“From the first day I took him to the racetrack I knew he’d make the grade.”

While Ukulele Lad has had only eight starts for four wins and as many minor placings, Wood has targeted the Group 3 Devonport Cup as his main mission.

“This dog does all the right things in his races so it would be foolish not to have a crack at the Devonport Cup,” he said.

“If a dog can lead and run time you don’t have to have a lot of experience and that’s what I’m banking on with this dog,” he said.

The Devonport Cup heats will be run on January 10 with the final a week later.