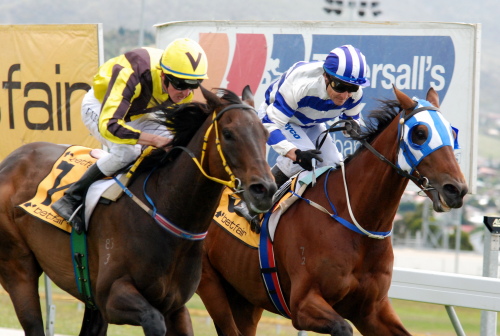 ROKEBY trainer Ray Worbey could not contain his elation when his lightly raced seven-year-old Organised scored a narrow win in a drama-packed Brighton Cup over 2080 metres at Tattersall’s Park on Sunday.

Winning the Brighton Cup carried with it ballot-free entry into the Group 3 AAMI Hobart Cup to be run over 2200m on February 13.

But the smile on Worbey’s face turned sullen when Stephen Maskiell, the rider of the runner-up Risk It, fired in a protest alleging interference three times nearing and on the home turn.

Organised rider, apprentice Ronan Keogh, had his mount settled second and in touch with Risk It that at one stage held a six-length break on his rivals.

The protest was quickly dismissed by stewards who, after hearing strong evidence from Maskiell, deliberated for less than five minutes and dismissed the objection.

Organised did move in slightly on the turn but Risk It also moved out slightly which left stewards with no option but to attribute the contact equally to both parties.

The smile returned and Worbey outlined his plans for the gelding leading up to the AAMI Hobart Cup.

Listen to what trainer Ray Worbey had to say about the win of Organised – click here .