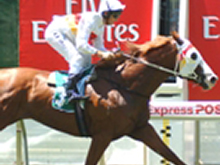 THE success of star galloper Geegees Blackflash has been the catalyst on which Paul and Elizabeth Geard have been able to build a thoroughbred breeding empire at their Broadmarsh property North-West of Hobart.

Geegees Blackflash first made his mark as a potential star when he won the 2010 Tasmanian Derby and after an injury-ridden four-year-old season he bounced back to win the 2012 Hobart Cup and this year he won the Launceston Cup to confirm his status as one of the best Tasmanian gallopers of all time.

The Clangalang gelding has won 15 and been placed 16 times from 45 starts and has accrued $814,000 in prizemoney, all of which has been won without having to leave the state.

But the Geards may have a new star in their midst in the form of well-bred stallion Wordsmith.

Wordsmith has produced five individual winners for seven wins overall and they have accumulated prizemoney of $183,000 with Gee Gees Style providing about $63,000 of the booty.

Gee Gees Style was placed in multiple feature races before scoring a narrow his victory over star two-year-old Grand Tycoon in the $30,000 Autumn Classic.

Paul Geard said he bought Wordsmith with the intent of having a resident stallion oat his farm to service only his own mares but his progeny have performed so well the inquiry has been so great Wordsmith could serve up to 50 outside mares this coming season.

“I have been amazed by the amount of inquiry from local breeders and trainers seeking Wordsmith for their mares this coming season,” Geard said.

“The general opinion seems to be that he produces horses that can run early and the ones we have got to the races this season have all shown good ability,” he said.

He was forced to retire through injury so he was put through the rung at the Inglis Great Southern Bloodstock Sale but he was passed in.

“I originally had my eyes on Written Tycoon at the sale but Simon Vivien from Inglis said that unless I had $500,000 I should try and look elsewhere,” Geard said.

“He suggested I look at Wordsmith and I liked Testa Rossa as a racehorse and stallion so when he was passed in at $24,000 I put in an offer of $26,000 after the sale and it was accepted,” he said.

Brighton trainer John Luttrell prepares all of Wordsmith’s juvenile winners except Geegees Red Rock that is trained at Spreyton by Leon Wells.

Luttrell believes the best Wordsmith two-year-old is Geegees Joker that is expected to make his debut in Hobart next month.