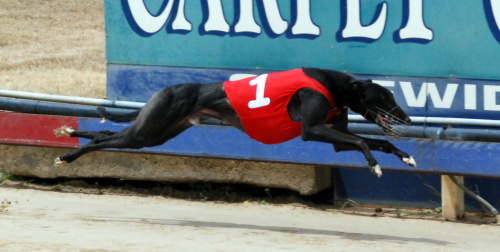 THE emergence of a litter by Big Daddy Cool from former smart sprinter World’s Finest has paved the way for a hot Breeder’s Classic final in Launceston next week.

Three from the litter, Damek, Decembrist and Daegan, charged into next Monday night’s final that boasts a winner’s cheque of $5000 plus a breeder’s bonus of $4500.

The clear standout of the litter is Damek and his semi-final win was nothing short of miraculous.

Damek began well from box two and looked set to lead but he was dragged down from behind and hit the first turn midfield on the rails.

But like a seasoned professional he recovered and set sail after the leaders.

At the halfway mark he sizzled past the leader Leica Taipan to take control and went on to score by 12 lengths from Hellyeah Missy.

For a youngster having only his fourth race start he showed incredible composure to shrug off the interference.

Damek stopped the clock at 30.22 which was 0.20 slower than his litter brother Decembrist but given the ground her lost in the scuffle there is no doubt he would have broken 30 seconds.

His breeder-owner June Phillips admitted she had her heart in her mouth when the dog was dragged down from behind.

“You can’t help but take a gasp when something like that happens,” Phillips said.

“He went down on his haunches and it takes a special dog to overcome that sort of interference.”

“He was checked out thoroughly and thankfully he took no harm from the incident.”

“It is great to have three from the one litter into a Breeders Classic final and it’s the first time it’s happened for us,” she said.

The litter was bred by her and husband Peter.

Damek and Daegan are prepared by Invermay trainer Eileen Thomas while Decembrist is prepared by Peter Philips.

Decembrist was the fastest of the four semi-final winners and while he doesn’t have the high profile of Damek he remains a live chance of delivering in the final.

Decembrist began well from box three and had the lead rounding the first turn.

He sped clear down the back and hit the line a length clear of Regent Typhoon with Luke’s A Missile only a head astern.

It was Decembrist’s seventh win from 17 starts with the winner’s purse taking his career earnings to almost $11,000.

Daegan showed his rivals a clean pair of paws.

He flew the lids from box two and was two lengths clear at the first turn.

He extended his lead down the back and while the others were closing in he still had over two lengths to spare over Regal Onyx with Dilston Dubai a distant third.

The Debbie Cannan-trained and owned Highest Regard cruised into the final with a convincing win in his semi-final.

Highest Regard began fairly from box six and settled midfield while Variety Bay raced clear of the early leaders Posh Luke and Bold Vista heading down the back stretch.

But when Highest Regard slipped into overdrive he gathered in the leader and went on to defeat that bitch by two lengths with Buckle Up Matt a distant third.

The first two placegetters in each of the four semi-finals progressed to the final.