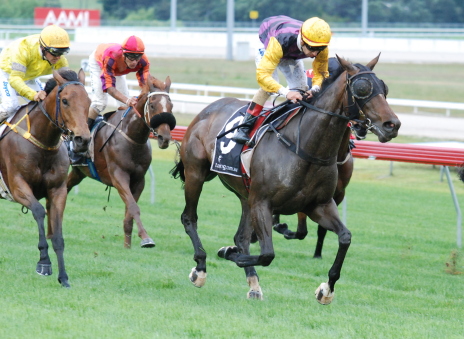 WHEN prominent thoroughbred owners Peter Thomas and Terry Clayton first registered Xaartee it was done with a hint of confidence that the then yearling filly would develop into a class galloper.

Purchased privately after she was passed in at the Tasmanian Magic Millions Yearling Sale, Xaartee found her way into the Barry Campbell stable at Devonport where she showed above average ability from day one.

But as often is the case with potential stars, she encountered a few problems that prevented her from realizing her potential.

During her first full preparation the filly started to tie up and once that problem was remedied she developed hoof problems and other issues followed.

But through it all both trainer and owners remained confident that in time Xaartee (Xaar-Growing Market) would deliver.

At The TOTE Racing Centre in Launceston last Wednesday night Xaartee, now a six-year-old, notched her second win in the space of four outings at what was only her 11th start.

Campbell said the mare’s future was bright because all the issues that stopped her racing are behind her and she is now an injury and issue-free racehorse.

Part-owner Clayton is thrilled with the mare’s latest efforts and is hopeful of bigger things to come.

“We obviously can’t get too excited about Xaartee because she has won a maiden and a combined maiden-class one but to have waited this long to see her realise what we thought she was capable of so long ago gives us a great feeling,” Clayton said.

“When we bought her as a yearling we did so on her type and solid English staying pedigree.”

“But when she first went into training she showed exceptional speed so naturally we thought she might get away with winning a couple of sprint races but then the problems started and Barry (Campbell) had no option but to send her to the spelling paddock.

“She was off the scene for some time and last year Barry brought her back and started from scratch,” Clayton said.

“After her first preparation last year we discovered she wasn’t suited to the sprint distances so we then knew her forte would be over longer journeys.”

“Barry set about conditioning her to run out a strong mile (1600m) and beyond and so far everything has fallen into place,” he said.

When Xaartee won her maiden in Launceston at the end of September it was Clayton and Thomas’ first winner outside of their handy middle distance performer Turova in over four years.

“We have bred and raced a lot of horses in the past three decades but for the past four years Turova has been the only one to win and those wins have been well spaced,” he said.

Some of the owners’ former star gallopers include Subordination and Mr Thomas that both raced successfully interstate, class grey mare Corridor Voices, Al Sadeeq and Repriced, to name but a few.

Clayton said Xaartee could be his first major Cup runner.

“Who’s to say this mare won’t continue on to next season and give Peter and I our first Hobart or Launceston Cup runner in over 30 years in the game.”

Clayton and Thomas have been only occasional visitors to the winner’s circle for the past four years but as often is the case in this industry it can be a feast or famine and in Thomas and Clayton’s case it is a feast at present.

Their lightly raced three-year-old filly Visual Effects scored a convincing win in a maiden at Devonport last Sunday and Campbell believes she has loads of potential.