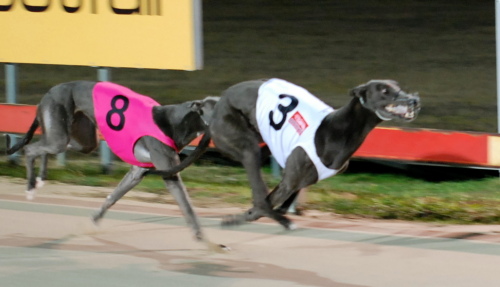 WELL bred youngster Callamac Ace made an impressive debut with a game win in a heat of the TGOTBA series at Tattersall’s Park in Hobart last Thursday night.

The Ian Callanan-trained dog began fairly from box three to settle third and be on the heels of the leader Ella Lucy on the home turn.

But when Callamac Ace slipped into overdrive he powered past the leader and went on to defeat Ella Lucy by a length with Flying Uno almost three lengths astern.

Callamac Ace (Where’s Hoover-Prize Pack) stopped the clock at 26.49, which was a handy run for a debut performer.

Callamac Ace is owned and raced by his trainer who also bred the litter.

The remaining division three heat, which is for juvenile and maiden performers, was taken out by Lucy Gaga that scored an impressive all-the-way win at only her third start.

Lucy Gaga (Elite State-Deep Model) began brilliantly from box five and easily crossed to the rails and led her rivals a merry chase.

She hit the line five lengths clear of Callamac Kid with Stylish Luke a half-length away third.

The well-bred bitch is owned by former bookmaker Kevin Tollputt and trained at Invermay by Bruce Macrostie.

The first four placegetters in each of the two heats progressed to this week’s final.