Youthful Jack heads back to Taree 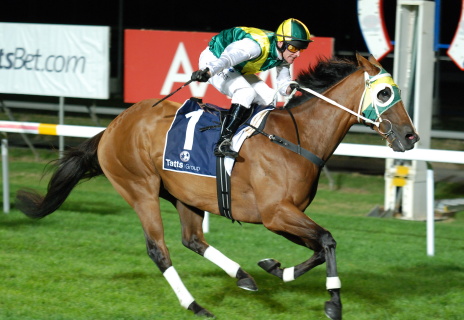 The horse’s part-owner, Taree-based trainer Ross Stitt, sent Youthful Jack to Trinder to train for the month-long campaign and he and the gelding’s other part-owner Geoff Sheedy, were elated with the Trinder’s handling of the former star juvenile.

“Having Youthful Jack in my care over the carnival was a tremendous experience and for the horse to have won all three weight-for-age features was a great effort by the horse,” Trinder said.

There was talk of Trinder taking Youthful Jack to Melbourne for the Blamey Stakes on the way home to Taree but Trinder said the horse was spent after his win in the George Adams Plate (1600m) two weeks ago.

Youthful Jack will head home to Taree and be given a break before tackling the Ramornie Handicap at Grafton in July and Trinder said connections are hoping to send the gelding back to Tasmania next season to defend his Triple Crown.

Meanwhile Trinder has only the one runner at tomorrow night’s thoroughbred meeting at The TOTE Racing Centre in Launceston but he has to wait until the last race to see if his five-year-old Adam’s Star can make it back-to-back wins.

Adam’s Star will go into the race fresh from his last-start victory in a strong class two handicap over 1350 metres on his home track at Spreyton (Tapeta Park) last Sunday week.

The gelded son of Adam-Star Jeune had promised a lot but failed to deliver at his first three tries this preparation but a change in his training regime recently may have been the turning point in his racing career.

“We’ve invested in a treadmill ($80,000) and I’m reasonably confident working him on that resulted in his much improved performance last start,” Trinder said.

“He was far more confident in his stride and maneuverability last start and that he was running in straighter lines can be attributed to his time on the treadmill,” he said.

Adams Star has had only 15 starts for two wins and four minor placings but Trinder has always maintained the horse has above average ability.